Rob Bertram was not a man who did things by half measure. He was possessed of self-confidence which is the hallmark of all achievers, but combined it with kindness and considerable charm, and genuine concern for people. One only had to watch Rob playing rugby to see the enthusiasm and singular determination he applied to the game. Added to the gusto and energy which were the hallmarks of his game, was considerable skill and plain rugby nous.

Some of the men who played with Rob at UCT in the late fifties and early sixties pay tribute here to this true Ikey legend. 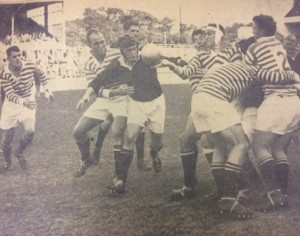 He was a mate as well as a teammate, and over the years we kept in contact and saw quite a bit of each other. On a personal note, our sons met and became close friends before becoming aware of our own friendship. He was also responsible for me meeting my wife, Shirley, and our first date, so it could justly be said that he rolled the dice of fate to happily favour me!

In spite of some difficulties I never saw Rob down or without a happy smile ready to light up the moment. He was a good and loyal friend to have and I am going to miss the bugger. On the field he was the classic hooker. Both Basil and Andrew spoke of his scrumming power and he commanded the centre ground often collecting the cross-kicks from our wings and generally making life as difficult as he could for our opponents.

Vince was right- he was a fierce competitor but always within the spirit of the game. If needed, however, he was not shy to dish out a bit of discipline. He was at the core of our success in the early 60s and ranks as one of the kingpins in the side. But it is Rob the forever cheerful character that infected us all with his goodwill, and who gave his unbounded all to life that l shall remember the most.

Rob Bertram was a solid hooker in the front row in the late 1950’s and 1960’s. With Basil Bey and Okkie le Roux on either side of Rob they formed a front row that stole many an opponent’s ball. His lineout throws were on target which he learnt from Peter Folb. Rob was a friend to all, even his opponents on the field.

I came to UCT in 1959 and Rob was one of the first people I met there at the under 19 rugby trials. We 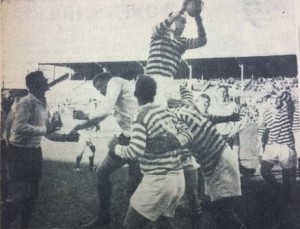 both played for the UCT under 19A team that year. It was a wonderful team captained by Steve Cloete who went on to play for Western Province. Rob was the perfect team member, playing hard all the time, very mobile and very competitive. He went on to be a regular member of the outstanding UCT 1st XV of 1961 for whom I had the honor of playing occasionally.

Off the field he was a good friend to many including me. Always charming and lots of fun with a great sense of humor. He epitomized the best of what it meant to be a UCT rugby player…..a clean, hard working and competitive tight forward – always sportsmanlike, and a gentleman on and off the field.

My memory of Rob is of an extremely friendly and good-natured guy who had a great capacity for remembering names and events. As a rugby player he had a total confidence in his own ability. He was never intimidated. The very first time he played against the Maties he marked Abe Malan. Very early in the game Abe punched Rob. Rob stood up and punched Abe right back ….that settled it and they both got on with the game.

Rob was one of the nicest and engaging people you could ever meet. We stayed in touch over the years and he will be in my memories.

Like other special UCT rugby men, Rob took his talents for life after university, honed them in different places like London, Kenya, Durban and finally back in Cape Town, and made a productive life with his family and friends. It was always a privilege and pleasure to catch up with Rob at UCT functions, to hear his strongly founded views on many subjects, and to share with him his rich repertoire of stories and anecdotes.

We salute Rob; a true UCT rugby man, as fine an example of the values UCT rugby inculcates in young men at university, their success in producing useful, productive lives and retaining a great love for UCT rugby and the friendships and fellowship formed at UCT.

Footnote:
Harriet, wife of Ivan Berkowitz, sent us note to say that Ivan passed away on the 27 July 2018. Ivan played lock for the Ikeys and Olympics (PE).