You are here: Home / Ikey Tigers / The Ubumbo Corner

At the beginning of 2002, medical school final year student Qhama Cossie put together what had been an idea for some years – to have a black rugby team playing in the UCT Internal League. The 90s to early 2000s were a difficult time for students coming from outside Cape Town, as they found it challenging to fit into the culture at UCT, more so at the UCTRFC. Especially for those who found themselves to be minorities. Cape Town as a city was generally known as being cliquey, UCT known as being elite, and most players didn’t see out their rugby playing years at the Club because they felt like outsiders – be it due to perception, or experience. This was the case for Qhama, and those who he recruited. The majority coming from the Eastern Cape, his home province. 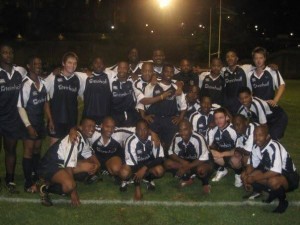 Fast forward to 2004, where Ubumbo shifted its focus from just being an internal league side, but made the conscious decision to not only become part of the UCT Rugby Club but also become a feeder to the club. Thando Gobe and Sipelele Mnyani took charge of this transition, with the encouragement of each Ubumbo player to join a UCT team, even if it was to play for the Marais team or the U20C. The strategy here was three-fold:

1. The players will have more game time.

2. Those good enough would make it difficult for what was then “Bishops-biased” coaches to ignored. It worked.

3. A home for UCT players recovering from injury to get some game time

Further to this, the UCT RFC had adopted Lagunya Rugby Club in Nyanga as their development partner where they were to offer equipment and coaching to their junior teams. Ubumbo put their hands up for the job, with myself and Vuyisile Mbula leading the project. UCT funded the sessions, and Ubumbo were out there every Tuesday and Thursday afternoon coaching boys (and girls) from under 11 to under 16. 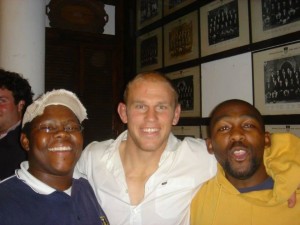 The unintended consequence of this involvement: Ubumbo players playing for UCT, coupled with being the hands-on resource in the development programme, led to more and more involvement in club activities; these included the annual black-tie events, the pub ‘activities’, and most memorable must be that players now stayed around to watch the 1 st XV every Saturday, whether home or away.

What has always been synonymous with Ubumbo is singing. We sang at practice, we sang in the changing rooms before the game, our supporters sang for us when we played, and we sang post the game (before, during and after fines meetings). So, we sang for the Ikeys every Saturday afternoon, in the blistering sun and in the cold rain. We sang.

This singing became a really significant factor when UCT were on the verge of relegation in 2005. We would gather at the stand in the corner near the entrance to the change rooms and sing our hearts out. There was a bit of despondence when the team was on a losing streak (it’s never nice supporting a losing side). It was at this point that sms’s (no whatsapp back then) were sent out to the wider Ubumbo family to come out and support the Ikeys as they were in danger of getting the chop. This was a no brainer as the likes of Mpho Mbiyozo, Sakhi Gqeba, Khaya Sontsele, Mwali Soul and Herbert Mayosi were to be counted amongst those who had either played for Ubumbo, or were involved in other ways – the corner got bigger, the voices got louder, the Ikeys won 7 in a row and avoided relegation. 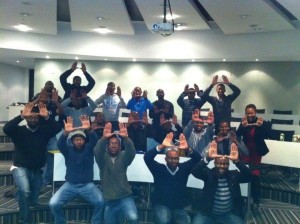 It was not just the thrill of those hard-fought games that got us there every Saturday, but the 1 st team walking towards us applauding at the end of each game that gave us the most pride. We were playing our part in this come back, but more importantly the transformation of the Club from being this exclusive Boys Club that it was perceived to be – and probably was – to be a true South African rugby club representative of everyone who wants to be a part of it.

So, no wonder when Ubumbo wanted to tour the Eastern Cape in late 2005, UCTRFC were the first to put up their hand to cover the bus and the kit. Then again, when Ubumbo wanted to host their first rugby festival in 2008, UCT offered their fields, the first R4000 in funding, as well as support. Even after Luke Watson’s speech at that festival hit the media, it was UCT who offered support legally, and in advice. Whether they agreed with the content or not. And they did so for the festivals that followed.

Who will forget the first Varsity Cup final when Ubumbo was there singing for the guys only to lose in the dying seconds, the one 3 years later when it was won, the ones in between when we couldn’t win, or the ones that no one remembers? “Maties iyho! Iyho yho…yho yho ayiqhashanga!” 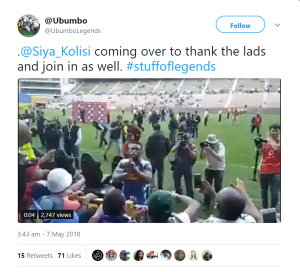 When Siya Kolisi got his 100 th Super Rugby cap, there was an Ubumbo corner at Newlands. He went there and applauded after the game. The reality is, when those gents went to applaud ‘us’ in 2005, and we felt proud, they weren’t applauding us. What I did not mention earlier is that at some point the Ubumbo corner was a stand – the voices got louder because it was everyone, even those who lived on hot chocolate who were chanting “Maties iyho! Iyho yho…yho yho ayiqhashanga!”

To get into the pub and have people from all walks of life chanting “Ntomb’emhlotshazana”, “Ayiqhashanga”, all along with the traditional “one man from next door”, “Once a Matie prostitute” was just the antidote to break the barrier…the one thing to say “IKEYS RUGBY CLUB…. WHERE EVERYONE IS WELCOME”.

Start something, then you must finish it, John le Roux once said to me. While we all obsess about equality on the field, the off the field stuff is missed. The Ubumbo – UCT FRC journey is not yet finished. It may not be the best of stories, and because it’s not finished may end up being a flop, for the doomsayers. But every time I’m at the Green Mile, and I hear the UCT teams singing at practice, singing at warm up – 14 years after the engagement – like any relationship, be it marriage, parenthood, brotherhood, sisterhood, there is something there that must work and must work forever.

A Tale of Two Boys
Scroll to top