You are here: Home / Ikey Tigers / Helderstroom Feel the Blues

It’s not often the Ikeys players get to experience the game away from their plush green fields (except this year!), semi-professional coaching set ups, and pre-game muffins. But when they do, they travel out to the middle of the Boland on a desolate field to play the inmates of Helderstroom Correctional Facility and Botrivier RFC! 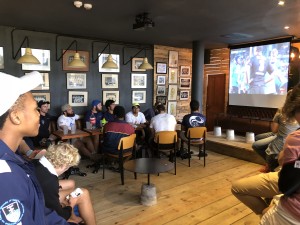 As part of our pre-season preparations, the Blues (made up of the 1st XV players outside of the starting Varsity Cup side) as well as the rest of the club, planned a gees camp out in Hermanus at a place called Habinom, to ignite the start of what promised to be a great season… this was of course before the official pre-season games were cancelled and the league postponed.

No matter, the Ikeys boys are always up for a good time, so we forged ahead anyway.

Having shared the destination location on our WhatsApp group, our tech-savvy players proceeded not to follow directions and ended up in Hermanus – 40 minutes from Helderstroom, where the game had been moved to the day before. Henceforth the camp was known as the “Not Hermanus” Camp. All my fault of course!

After all the players arrived at the field, having shared several pictures of their off-road adventures to find out if they were “on the right track”, the team playing first only had 15 minutess to warm up before playing the Helderstroom inmates.

With an inspired pre-game speech and tactical talk from Ikey veteran and legend Stephen Wallace at the helm, the team was well riled-up, motivated to play, and confident as ever… that was until we were informed that we would be facing the Haka! The Blues proceeded to line up and face what must have been among the best ever renditions of the Haka! The passion and fervour from Helderstroom made it clear they were there to play – and to play hard.

Thankfully the slick skill and conditioned fitness of the Ikeys shone through and by half-time the away team was comfortably ahead. To liven up the contest and in the spirit of the occasion, the ref and I had a quick subtle chat before kicking off the second half… It didn’t take the players long to realise that the ref was no longer on their side as he proceeded to quite unapologetically, yet inexplicably, blow them out of the game.

Beyond good fun, the idea behind the ploy was part of our pre-season plan to prepare our players for any eventuality and train them to be able to adapt to changing playing environments. To the players’ credit they held their composure and their discipline remained steadfast until the final whistle sealed a well-deserved victory. 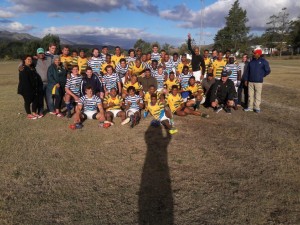 Ahead of the last game of the day, against Botrivier 1st XV, the team – made up of mostly Varsity Cup squad players and a few seniors – was given a valuable reminder that there is a lot more to rugby than playing for bursaries or playing to become a professional player who performs in beautiful stadiums and has every luxury available to them. No, rugby is about forging friendships and making memories while playing on a windswept field in the middle of rural farmland, against a team that you’ve never heard of, in a game where the stakes are low. These moments are why we play rugby.

Understanding the deeper value of rugby was the theme of the tour, a theme I hope to keep at the top of minds for years to come. Although the club game continues to become more professional, our Ikey DNA is based on becoming better people first and foremost and we must never forget that. True to the Ikey identity the team eagerly took on the challenge and played the Botrivier game with great intensity, putting on a running rugby show for the small crowd which they’re unlikely to forget for a long time. For many, the Ikeys are future Super Rugby players and Springboks, so simply watching them play well was a real highlight, especially for the inmates of Helderstroom. Just ask the man of the moment, Sam Phiri, who was forced to take the team pic with his new fans after a powerful display on the wing.

Putting a comfortable 80 points on the board, the game was easily won by the Ikeys. It shouldn’t go unsaid, however, that Botrivier managed to score a respectable 30 points themselves – indication that they have the potential to play nice rugby. One would except them to do well in their league this year. 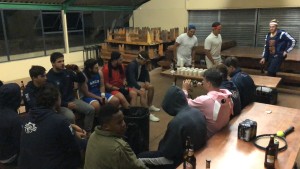 After the formalities and a boerie roll, the Blues set course to the campsite some 40 minutes away, in Hermanus. After some difficulty finding the venue in the dark, we eventually located our little cabins and, loaded with copious amounts of beer, proceeded to hold fines in our Olympic attire.

Fines – always an amazing team building exercise – was ably run by Paul “Puff” Hendry, Zade Bester, and of course the legend that is Wally. With a good mix of the Varsity Cup squad, new u20s, and 3rds the evening was a highlight of the trip and undoubtedly one of the better fines I have enjoyed whilst at the club! Nothing more will be said about the proceedings of course…

With headaches and an irritable Manager who’d lost everything but the clothes on his back, we headed home the following morning. I hope this will not be the last time we go on camp in ‘Not Hermanus’.

All told, the camp achieved what we set out to do: Build gees, shapes us into better people, and create
new friendships and memories to last for years to come.

Thank you to the players who came out and to my management staff, Wally, Andrew Douglas, and
Matthew Redman, as well as to Johnny, Clem, and Gavin who helped make the camp a reality.