You are here: Home1 / Old Boys2 / Looking back at 1986: National Club Championships Town and Grand Chall... 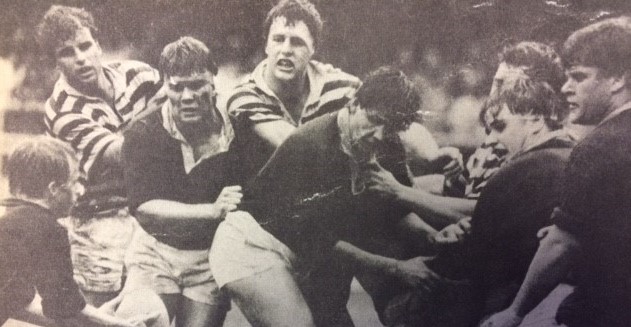 In the 1985 season UCT were the clear runners up in the Grand Challenge and were invited to attend The Easter National Club Championship Tournament alongside other teams such as Despatch, Tukkies, Shimlas, Roodepoort, Durban Collegians, Windhoek Wanderers and of course Maties, all the powerhouse clubs in South Africa at the time. This was the second time that UCT had been invited, the previous time being in 1975. 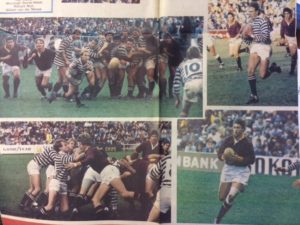 A few pre-season friendlies were easily won against Wellington and Paarl Training College followed by a hard fought win against Gardens-Tech who were captained by Schalk Burger senior. Then it was off to the Club Championships. In the first round, the Ikeys were up against Durban Collegians the Natal champions. The Ikeys won 18-10 with the hero of the day being Clark Ellis who scored one and converted two of the Ikeys three tries. The Ikey front row of Paul Day, Johnny Joubert and Keith Andrews destroyed the Collegians front row in the scrums. There was an ugly incident with Ikey flank Andrew Campbell being punched and knocked off his feet. The Ikeys were awarded a penalty which they converted…Greg Morse stood out in the tight and Ikey Willem Van Merwe was the pick of the loosies. The win qualified the Ikeys to play Shimlas in the semi-finals. A depleted Ikeys team pushed Shimlas close a try in the dying moments saw them lose 14-18. The tournament put the Ikeys back on the rugby map of South Africa as the team received a lot of media attention. The downside was that the team returned with 8 first team players being injured, including two fractured jaws and other serious injuries. 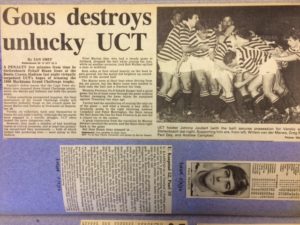 The Town challenge at that time consisted of 21 teams divided into two sections. The first game of the league was a week later against a weak Coronations side with the Ikeys winning 84 – 8 (when tries counted 4 points!). This was followed by a 9 – 3 win over Villagers by way of three Clark Ellis penalties. The next game was supposed to be against Police but due to some confusion they did not turn up with a full team (there were no cell phones in them days!) and the game was cancelled and the Ikeys awarded the points. The Ikeys remained unbeaten accounting for Strand Somerset-West 16-12 with a sole try from wing Peter Merrington. Then it was up against a strong Victorians side but the Ikeys were bolstered by the return of then Provincial prop Keith Andrews and the Ikeys ran out 22 – 3 winners. Four comfortable wins against Northerns-Parow 53 – 9, Paarl 24 -9, Northerns League 74 – 0  and Bellville League 28 – 10 followed. The final game was up against Hamiltons, which the Ikeys won 22 -3 to reach the final of the Town Challenge against Defence (who beat Maties in the other section of the Town Challenge competition).

Then it was off to the then Transvaal for a mid-season tour, including playing Wits in a curtain raiser to a Currie Cup match at Ellis Park. The Ikeys beat Wits 39-0, then Jeppe Old Boys 25-9 and then played Wanderers (won by UCT but score unknown).

The second half of the season was played as the Grand Challenge competition which was more of a strength vs strength competition where only the top teams from the Town Challenge competed. First up was Bellville which the Ikeys won 24-13 but lost lock Greg Morse to a serious ankle injury. Then the Ikeys played Bellville League and were fortunate to retain their unbeaten status. 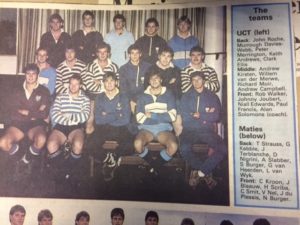 Intervarsity, the big one and both teams entered the game with no clear favourite. The Maties had players of the stature of Tiaan Strauss, Guy Kebble, Schalk and Neil Burger and Hans Scriba. It was a game pundits in both the Afrikaans and English media said the Ikeys should have won. The Ikeys dominated the scrums, the Maties the lineouts but it was the kicking that let the Ikeys down (missing seven kicks at poles during the game!) and the game ended in a 13 all draw.

The Grand Challenge continued and Ikeys faced a powerful Defence side and the game also served as the Town Challenge final. The Defence side included a number of provincial players including Carel Du Plessis, Gert Smal, Freddie Ferreira, and Faffa Knoetze. Defence dominated every facet of the game but the Ikeys fought back and the game ended in a draw 15-15 and sharing the Town Challenge trophy. The standout Ikeys were Clark Ellis and Andrew Campbell. The draw was also due to a move called “Lochore” successfully executed by the Ikeys just before the final whistle. The move owed its name to the All Black 8th Man who had toured in 1970. Doc Moss had noted the tourists using it effectively and on request, Brian sportingly explained it to Cecil. It is based on the 8th man breaking away from the scrum, taking the pass from the scrumhalf, the inside centre making a dummy run and the ball being passed to the flyhalf and outside centre.

Next was Gardens-Tech which the Ikeys won 19-9 in a poor display. Then they had to face Maties again, with the knowledge that whichever team lost would likely not go on to win the title. The Ikeys were unlucky to lose the game to a late penalty 9-12. The Ikeys went on to beat Paarl 52-10, Strand-Somerset West 21-7 and Villagers 42-6 and ended up as runners-up to Defence in the Grand Challenge. A very successful 1986 season and one that could have been extraordinary but for some small margins. 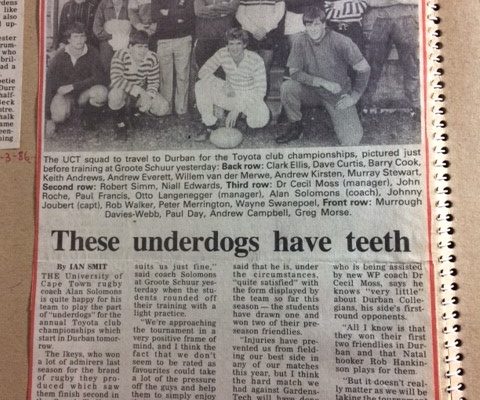 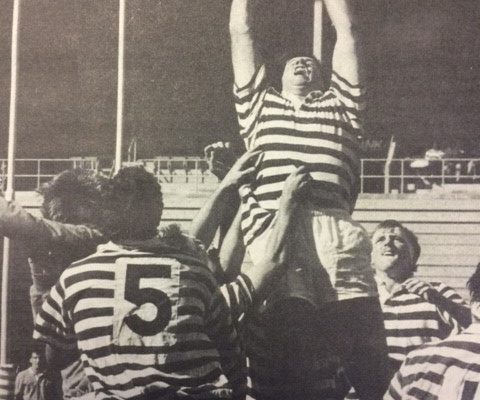 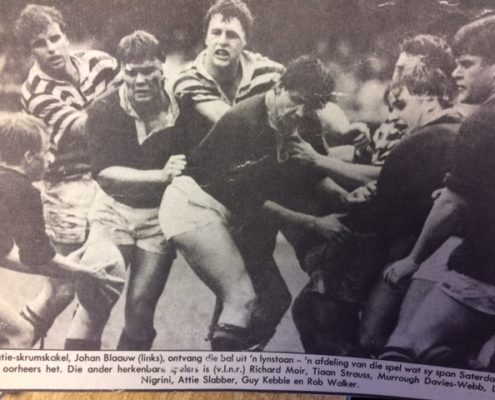 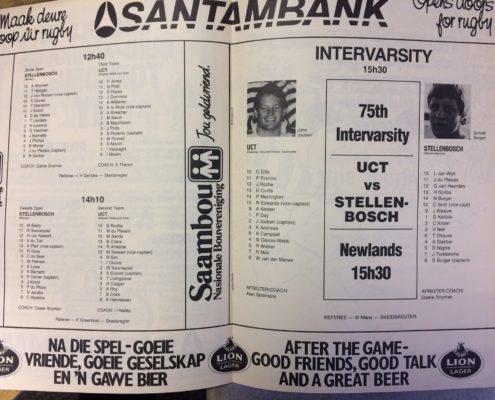 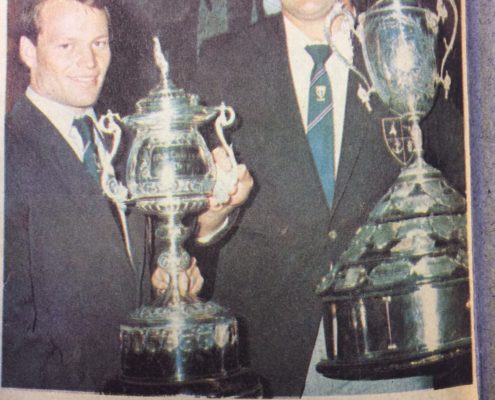