You are here: Home / Ikey Tigers / Ikeys Poised for Doc Moss Memorial Thriller Ahead of the FNB Varsity C... 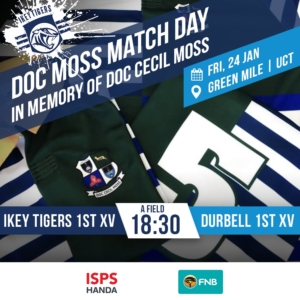 As part of their build up to Varsity Cup 2020, the Ikey Tigers will be honouring one of their favourite sons, the late Dr Cecil Moss, in their final pre-season game against Durbell on Friday the 24th of January.

The blue and white hooped Ikeys begin their Varsity Cup campaign under new head coach Tom Dawson-Squibb away to UJ on Monday, February 3rd, and will be hoping to put the finishing touches to their game as they pay tribute to the man known fondly as “Doc Moss”.

In honour of Moss, a truly legendary Ikey player, coach and president, the UCT RFC will host the 2nd memorial game between the UCT Varsity Cup 1st XV and 2019 WP SLA champions, Durbell Rugby Club, who will also be representing WP in the Gold Cup this year.

And with the Ikey Tigers having burgled a last minute win against the same opposition in the SLA last year, it should make for compelling viewing.

“The Ikeys and Durbell have a close respectful relationship and there is great camaraderie between the fans of both clubs. Both teams have been hard at it in preseason and are exciting to test their mettle against their friendly rivals,” said Club Director, Johnny Biderman-Pam.

The match will be held on The Green Mile on UCT Upper Campus. The club’s junior teams will raise the curtain at 17h00, with the main event kicking off at 18h30.

Entrance is free. Food and drinks will be available from the club pub, fondly known as The Ikey.

Doc Moss was schooled at SACS, and after completing his studies at UCT, went on to become a dedicated and respected anaesthetist who assisted in the first ever heart transplant, and was part of the team that operated on Nelson Mandela during the former president’s political imprisonment.

Believed by many to be a rugby genius, and like his famous compatriot, Doc Danie Craven, built SA into a rugby powerhouse for many decades. His rugby home was UCT RFC, or “Varsity” as he liked to call it.