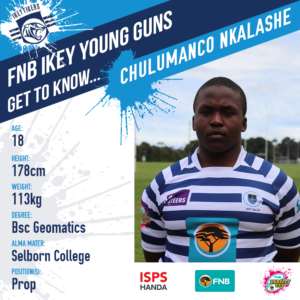 Meet one of our newest Young Guns – Chulumanco Nklalashe. Affectionately known as Chicken, this guy is seriously one to be on the lookout for – with a personality and a zest for life like he does, there’s no doubt he is going places.

Nklalashe hails from the Selborne College in East London, where he was scouted by the Young Guns’ Manager, Jono Field. Nklalashe explains that UCT “has always been in my life and on my radar, it was written in big letters that I should go to UCT so when I was scouted it was such a big surprise.”

The Young Guns starting training in October last year, but Nklalashe was unable to join pre-season as he had to finish his Matric in East London, but he assures us that he had no problem playing catch up both physically and socially.

“The culture in this club not something you see every day, people are so welcoming, even the first team players” and explains that he is best friends with people he literally only met a month ago.

Nklalashe attributes this culture fostered in the club to the successful start of the Varsity Cup season.

Nklalashe is very ritualistic on match-day, he relaxes and makes no plans at least three hours before kick-off. He explains that he listens to Hillsong music,

“I am deep into my faith and it gets me into the zone and reminds me what god has given me to do on the field.”

While zoning out, Nklalashe visualises the opposing team, something he explains to the coaches do a very good job at in training.

Playing for Western Province is a big aspiration for Nklalashe and explains that he only started taking rugby seriously in Matric when the coach saw potential in him and brought him up to the first team. But, if he is anything like Mapimpi who only starting playing rugby at the tender age of 25, we think 18 isn’t such terrible form.

Nklalashe promises to remember us when he is famous!

Good luck for the season boys.

Catch the Young Guns at home: