You are here: Home / Comments / The Merry Lives of Pat Tebbutt

Just when I thought that I knew quite a bit about Pat Tebbutt I was given a copy of his highly entertaining autobiography, written in collaboration with Dave Hilton-Barber.

Pat describes his life as a journalist, broadcaster, barrister, businessman and judge… truly a life spiced with variety.

Not many men reach the age of 92 in a condition of reasonably robust health, age appropriate, with faculties as sharp as ever, and a wicked sense of humour intact.

I met Pat many, many years ago when I was an aspirant broadcaster learning the ropes at the SABC in Sea Point, Cape Town. As a controller, the lackey who opened and closed the microphone pods for the announcers, mostly experienced broadcasters, I often worked the controls for that wonderful character, C.K Friedlander, when C.K covered local club rugby in his inimitable Damon Runyan like style. Pat joined him as a sports broadcaster and as an 18-year-old he was the epitome of a ‘gent.’ He had a commanding presence, a fine speaking voice, and impeccable manners.

Those early impressions have not changed. What has happened is that in the intervening years he went on to become a journalist, a well- known radio broadcaster, a highly respected barrister, a learned Judge, a businessman, and a key figure in unifying Western Province rugby at a tricky time in our convoluted political history. Pat has also been hugely instrumental in guiding the fortunes and meeting the challenges of two Cape Town rugby clubs, UCTRFC and Union Rugby Football Club, a remarkable rugby club formed in the tense times of WW2. The birth, the development and the sad end of this rugby club is graphically depicted by Pat in his compelling book entitled ‘The Spirit of Rugby’. Pat endured slings and arrows as well as accolades in his long association with the Union Rugby Football Club. Its relatively brief history is a testament to the commitment and grace which Pat brings to any organization with which he is involved.

As a long standing and very proud UCTRFC Ikey, I have seen how much Pat has done for our club over the years. He is still actively supporting our cause as Patron. Time and time again he has represented us with skill, wisdom and his own special brand of articulate persuasiveness. UCTRFC is greatly indebted to Pat for the role he has played in the fortunes of the club over a very long period time. Perhaps the greatest tribute to Pat, in this regard, can be found in the words of another great Varsity Rugby man – Pat’s close friend, Varsity Rugby teammate and the oldest living Springbok – Doc Cecil Moss: 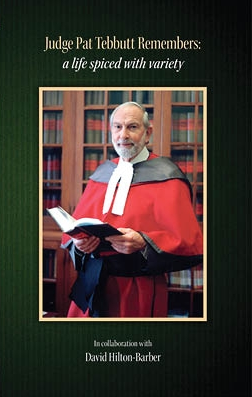 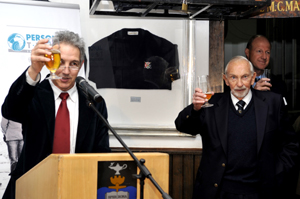 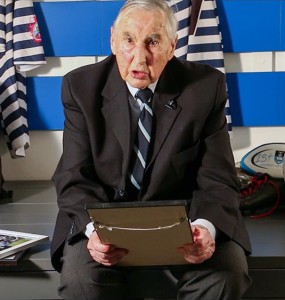 Doc Cecil Moss featuring in the ‘Spirit of the Ikeys’ video.

“I have been privileged to have known Pat Tebbutt, the patron of UCT rugby, for some 70 years. At the age of over 90 years he remains the senior voice in propelling UCT rugby forwards. He is full of wisdom, enthusiasm and support for UCT rugby. I was lucky enough to be part of the Golden Years of Varsity rugby from 1966 onwards and Pat has been a source of inspiration and loyalty to our club.

Pat has been a rugby commentator, a rugby administrator, a senior business man, and reached the top of the tree when he became Judge Pat Tebbutt. He is an extremely modest man. Few would know of his many achievements. He was the arbitrator who presided over months of negotiation with the three racial factions in the Cape, enabling them to become a unified Western Province Rugby Union. Without Pat this unification might not have been possible.

Pat remains a confidant, a mentor and a friend to the whole UCT rugby family. Pat has never lost the common touch and Varsity remains close to his heart.”

Along with those mentioned by Doc Moss, one of Pat’s most honourable attributes is that he is that rare creature in the modern world, a fine story teller. As he told me recently, the hallmark of an autobiography is not what is revealed in it, but what is left out. Not only has Pat ranged across a wide spectrum of professions, but as that other memorable character, Judge President, Judge Andries Beyers, replied to the question (must have been either a brave man or a foolish one to have quizzed Judge Beyers) as to what his biggest fault was; ‘Dis dood eenvoudig. Ek trou te maklik!’

Pat has been married three times. That is not the point. At the age of 62 to marry a highly attractive younger woman, thirty years younger than oneself, is no mean feat, but to make it work as well as it has, is laudable. No doubt Gilly, famous as a Springbok golfer, inducted into the South African Golfing Hall of Fame in 2010, has played a massive part in the enduring success of the marriage. One is inclined to say that it is not how you start your marriage, but how you sustain it. 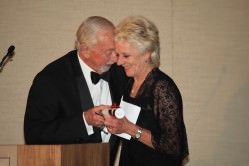 Pat Tebbutt congratulating wife, Gilly Tebbutt, as she is inducted into the Golfing Hall of Fame – December 2010.

One of the treasured tales about Pat involves his trusting nature (outside of a court room), his innate kindness and the human trait most of us share; the inability to resist what the local dialect so succinctly describes as a ‘a gap’; an irresistible bargain.

Every rugby club, and most cricket clubs, and men’s social clubs have one resident ‘skelm.’  This character is a larrikin, a chancer, sometimes a down to the ground conman, but mostly a man who preys on the goodwill and gullibility of his fellow club members with a convincing line of pure bullshit, a convincing story to lure them like lambs to the spit.

In this case, let us call the ‘skelm’ Pastie Do Gooder, and the victims numerous club members of at least two rugby clubs Pat has a taste for good whisky and he was heard to mention his thirsty desire to acquire some of Scotland’s finest during a chat with Pastie, strolling on the Muizenberg catwalk. Do Gooder immediately assured Pat that he could get the sought after whisky at a keen price if Pat could pay a substantial sum up front. As is the inevitable outcome of these transactions, the whisky never arrived at Pat’s doorstep. Pat tells this story with gusto and marvels at how Do Gooder did lots of No Good. He was pure Paai in the Sky.

A few years back UCTRFC press ganged Pat and I into being the club guardians of the then recently deposed Springbok rugby coach, Peter De Villiers at our annual club dinner. Shortly before the dinner a group of us celebrated the launch of an excellent autobiography written by one of the other great gentlemen of UCT rugby, Doctor Cecil Moss, who is not only the longest surviving Springbok player, but also a member of the elite club of men in their nineties who have lived full and eventful lives.

Pat and I agreed that we needed to suss-out Peter De Villiers carefully, as he had a reputation of being a feisty, prickly character. In order to do this, we fortified ourselves with impressive quantities of vintage red wine, and skirted around any contentious issues surrounding Peter De Villiers. As it turned out, Peter was a quiet, terribly serious guest who made no outrageous statements, probably to our collective disappointment. Peter did not drink alcohol, but Pat and I drank for him. It was the least we could do. 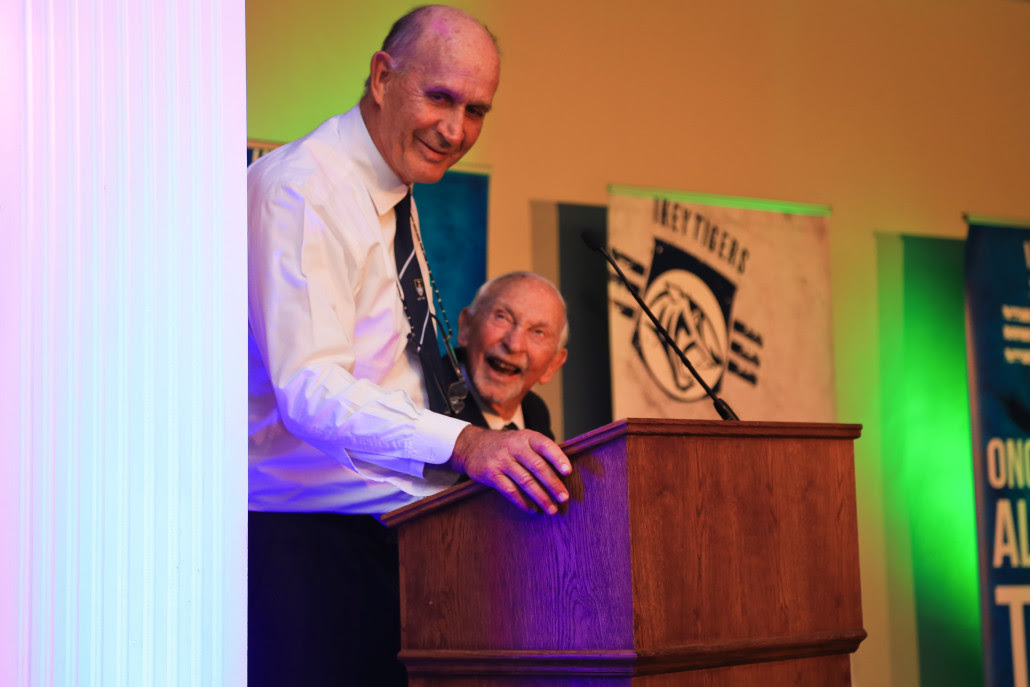 A good deal of Pat’s early life laid the foundation for the man he became. Growing up in old Rhodesia, Fish Hoek, Mount Frere and Mafikeng equipped him with the early education, sporting opportunities, and small town values, which are very special gifts given to a young man. His parents must have played a big part in inculcating these values and attributes in a young Pat, but once he went off to UCT to study law he wasted no time in enjoying himself, studying successfully, chasing skirt successfully, and acquiring a taste for the good life.

This emergence of the innocent chrysalis into a butterfly was rudely interrupted by the Second World War. After a brief stint as a soldier, Pat became a matelot in the South African Naval Forces, signing up for training on the good ship HMS Bonaventure. I can think of no ship so aptly named for one Cadet Tebbutt. Pat loved his time at sea and became a capable sailor to boot. Typical of his uncanny ability to be at the right place at the right time, Pat was in harbor when he heard that he had graduated at UCT in his quest to obtain an LLB degree in law. Pat duly celebrated his graduation in the customary style before returning to his ship. I wonder how many SANF sailors had an LLB degree.

Whatever Pat has tackled in life, be it law, business, sport, wartime naval service, sports commentating, journalism, ladies, he has brought elegance, charm, wit and that very precious gift, the ability to relate to people from all walks of life.

As a keen cricketer Pat relates that his good friend and fellow legal ace, Jules Browde, who died recently at the ripe age of 96, told Pat that he was scoring in singles to reach his ton. Unfortunately, a sneaky googly upset his march toward the well- deserved century. We all trust that Pat will keep scoring solid singles so that we can celebrate his century in the style he warrants. Her Majesty, Queen Elizabeth, is not likely to send a telegram to Pat, but if she knew that the young reporter who saw her as the 21-year-old Princess Elizabeth in 1947 when she toured South Africa with King George VI, Queen Elizabeth, and her sister Princess Margaret, would go on to pursue a range of professions, careers, adventures, escapades, all spiced with variety and verve, she would nod her royal head in silent approval.

People like Pat Tebbutt are a national treasure, and in these tempestuous times, we need all the great characters and heroes we can muster.

As a friend and admirer, Pat, the Maori Mantra I like best, ‘Kia Kaha’; Stay Strong, applies to you sir. Keep on accumulating singles and stories. 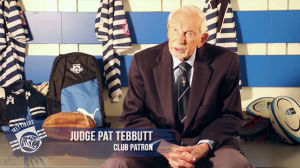 Pat Tebbutt features in the 2016 ‘Spirit of Ikeys’ video at the launch of the ITSC. 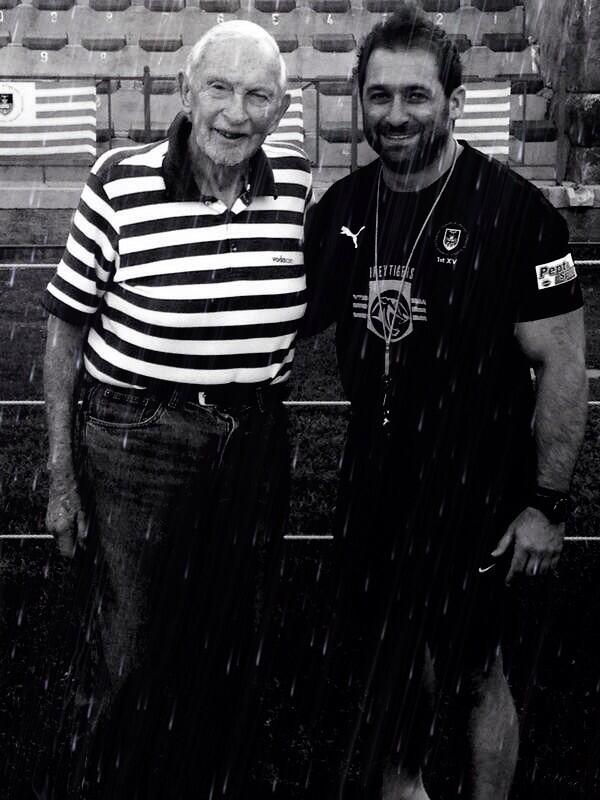 ** Read more about the ‘life and innings’ of Pat Tebbutt in his highly entertaining autobiography:

The Springbok indaba – what should be on the agenda