Basil was an important source of inspiration to me throughout my rugby career at UCT from 1959 to 1963. Without realizing it, my time playing rugby at UCT coincided with the period during which Basil evolved from being a young untried UCT 1st XV captain, to an emerging iconic figure by the time we went our separate ways at the end of 1963.

I arrived in Cape Town in 1959 having grown up in the Eastern Cape. As a teenager who was devoted to following rugby, the ideal team from my perspective, in all of South Africa, was that of UCT. The University rugby team had a national reputation for playing fast, open and clean rugby. UCT had produced an endless stream of great Western Province and Springbok players like Paul Johnstone, Dennis and Stephen Fry, Dick Lockyear and Brian Pfaff, to name a few; players with a reputation for being not only wonderful rugby players, but also true gentlemen.

So, it was with a sense of awe that I arrived in Cape Town in 1959, played in the freshman trials and was lucky enough to play for that wonderful UCT Under 19A team of 1959, captained by Steve Cloete and coached by Doc Porky Wells.

That year was Basil’s first year as 1st XV Captain, and when I first got to know him. Right from the start of our long association he was warm and encouraging to me, and to all of us in the UCT Under 19A team. It was the ultimate privilege and pleasure to get engaged in an earnest and passionate conversation with Basil at Forries, our unofficial UCT Clubhouse, on a Saturday night when the post- game analysis and the lessons learned from that afternoon’s game were debated, dissected and absorbed. To be included in these post-match sessions with Basil was heady stuff for a 19-year-old freshman. To be taken seriously by the 1st XV Captain was very special. Even then, so many years ago, his sincerity, warmth, humility and innate decency stood out like a beacon for an impressionable youngster.

In the defining year of 1961 – a year in which UCT rugby regained its lustre and set the benchmark for years to come as a rugby club that played the game with flair, panache and a spirit of adventure which was infectious – I played a handful games for the 1st XV., captained by Basil and coached by Louis Babrow and Tom Hamman; two legendary Ikeys. It was an unforgettable experience playing under the leadership of this great captain, exhorting his team with encouraging words, summoning us to try that bit harder at every moment of the game. And because it was Basil, we did just that, not only because it was for UCT, but because we wanted so much for him to be proud of us.

That year the UCT 1st XV won the Grand Challenge, and won Intervarsity at the Stellenbosch fortress, Coetzenburg. What a day, and what a party celebrating afterwards.

I was a regular member of the 1963 1st XV, captained by Andrew Sass, with Basil playing hooker, not his regular position. This was typical of Basil. He had wanted to move on to False Bay, but was persuaded to delay his departure, which had become the rugby club so many UCT players gravitated toward after their student days. 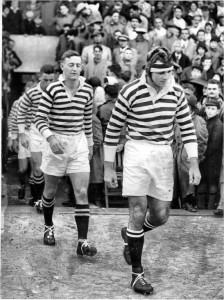 It was during this year that Basil began to transition from a hugely popular and inspirational young captain of a university rugby team into a legendary rugby elder statesman, who left an indelible stamp on rugby in the Western Cape at both schools and club level. His influence in playing the game in a special way translated into inculcating his rugby philosophy into schoolboys, many of whom went on to become international players of note.

Basil was a central figure to me during the various phases of my rugby career at UCT. A thoroughly decent man, always encouraging, devoted to the game of rugby, to be played at top speed, with a sense of sheer enjoyment and uninhibited flair. His famous mantra echoes today. ‘Play, play, don’t kick the bloody ball!’

On my occasional visits to Cape Town over the last ten years, I knew that it was worth hanging in during those famous, awkward first ten minutes of ‘Bey Silence’ on meeting again after a long absence. The laconic, monosyllabic questions and answers from Basil would give way to his natural warmth and kindness, unfolding into a long and delightful discussion on a broad range of topics. Basil was a profound thinker, a philosopher, a wise counsellor imbued with a dry, wicked sense of humour whose kindness and decency shone through whenever one shared time with him. 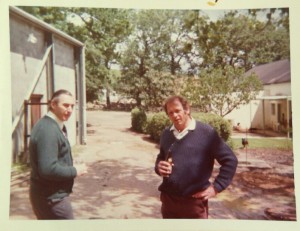 I join all my UCT friends in saluting this extraordinary and unforgettable man.

Great and true tribute from Vince. He wrote so adequately and accurately from my own heart, that it would be self-indulgent for me to add to something already complete.

Quite simply, every privileged minute l played with him, I played for him.

Thank you, dear Basil, for the memories. Thank you.