Part 12: A Tribute to Basil Bey by John Dobson

You are here: Home / Basil Bey / Part 12: A Tribute to Basil Bey by John Dobson

I don’t think Basil liked cricket much. As Martin said in his wonderful eulogy to the Fallen Mighty – he wasn’t so fussed whether we won or lost, as long as it was over quickly. But, being a good and loyal schoolmaster, in the days when schoolmasters worked, especially in boarding houses worked 6 to 6 1/2 days a week, he thought it was his duty to coach it.

But Basil being Basuk made sure he always coached a lower team, ideally the ones who wore shorts and not longs – not for any deviant reason but just because they tend to be the less serious (and thus quicker cricketers – incapable of a full days play) and, of course, they played with rugby socks.

I captained one of those lower teams and we went off to play the Constantia reformatory, where I think Flekkie started out. As it was their First (and only) XI, it was a full day match. That same afternoon, in a rugby game in November, UCT legend Nick Mallett was to make his Springbok debut against the touring Jaguars. Cricket on a test match day. We assumed (and could sense) Basil didn’t want to be there and that he wanted to get to Newlands in a rush. 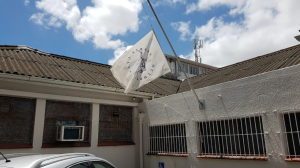 The Olympic Club in Rondebosch fly their flag at half-mast in honour of Basil Bey.

We went out in his old orange Volkswagen Combi, in which if you dropped something, it landed on tarmac. Being Pauls son, no doubt, he made me the captain and I won the toss. I won the toss and told their tattooed skipper that we would field. All I heard was Basil shouting from behind “Don’t do that, don’t do that”- Basil imploring me not to field.

I soon realised why, we were all out for 21 and we are back at the school at 10:15 AM. I then cheerfully said to him “Sorry about that Sir, but at least you can make Newlands now.”

The Bey silence. Then the reply. “Bugger that, I am off to the club – Zeta thinks it’s an all-day game.” By the club of course meant Olympics.

Another fond memory I have with Basil was from my time playing rugby in Italy, when Bishops were touring. My father and Basil at it again. We went out for a night with some Italians where BB found a beer called ‘7 degrees of torrid pleasure’ – the legionnaires’ drink. He got through a few of those in quite a short space of time. We then went to a dance hosted by the local women’s club, where he claimed to have danced with a Contessa – entirely unverified. We got back to my apartment at about one in the morning with a temperature of -10° in Verona, and Basil and I thought we should maybe go for one or two more ‘7 degrees of torrid pleasure’.

I had a very old Fiat, of course, and my father was tired and chose to turn in, so he went upstairs to the fifth-floor apartment. 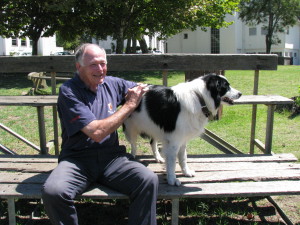 When we got back, we realised we had given Paul the keys for the place, and secondly that I’d forgotten that my bell didn’t work, so we couldn’t get through the main ground floor entrance. With other apartments not answering, and given the temperature, Basil suggested we go for a beer to think about what to do. When the Pub closed, and the temperature now minus 12, we went back and shouted for Paul to buzz us in. No luck.

Basil said we shouldn’t worry as Paul would get up in the night and go for a ‘piss’, “his bladder is weak. Like most Arians.” With the temperature hypothermic, we decided to wait in the car with the heart, taking turns to watch for when the light went on when Paul went for his ‘slash’. However, the car heater only works if the engine is running. No problem – until we ran out of petrol. Probably joining an elite band of those who have run out of petrol without driving a metre.

As we started to shiver, Basil spotted a drainpipe and thought he could make it up there, but he got stuck on the second floor on the balcony of the Italian Communist party offices. I wish we had cellphone cameras in those days. He managed to get down and we stood outside shivering; but then, just before we became hypothermic, at about five am, a light clicked on and Basil gleefully shouted “I told you I told you! Paul, Paul open the door” and all was well.