Part 18: A Tribute to Basil Bey by Richard Neville

You are here: Home / Basil Bey / Part 18: A Tribute to Basil Bey by Richard Neville

Whilst this is not a rugby story about Basil, it certainly is a classic anecdote that you might not have heard before and I think you will enjoy.

Our standard 9 year in Top House was a strong one, packed to the brim with unique individuals and characters. We had done the sums in our newboy days and were acutely aware that Mr. Bey, sadly, would not be Housemaster of School House in our Matric year. We were part of the end of an era, that was for sure.

Whilst this is not a rugby story about Basil, it certainly is a classic anecdote that you might not have heard before and I think you will enjoy.

Our standard 9 year in Top House was a strong one, packed to the brim with unique individuals and characters. We had done the sums in our newboy days and were acutely aware that Mr. Bey, sadly, would not be Housemaster of School House in our Matric year. We were part of the end of an era, that was for sure.

When it came to the time of year when the Matrics left for exams and then on to the blur that is ‘Plett Rage,’ we took it upon ourselves to start running the House – an excuse to spend more time with Basil, I guess. That said, I count ourselves fortunate to have enjoyed a couple ‘high tables’ with him during that time, which was great fun – but not the basis of this particular story. 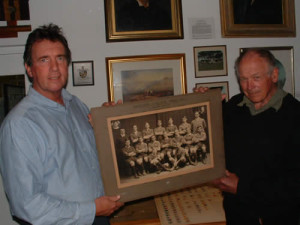 One night, during our first taste of ruling the roost, a few of the lads decided to bunk out to the go-to drinking hole at the time, Naughty’s on Rondebosch Main Road (some of you might recall Francois on guitar and Eddie at the door!). The obvious exit was through the windows on the Ogilvy side of School House – and out crept Stuart Abbott (*cough* MBE), Greg Wilson, Mike Wright, Graham von Hoesslin, Phil Green and Jonathan Grieve. All dressed to thrill with Studio Line hair gel to complete the look.

Needless to say, the boys went fairly hard. After all, the Matrics were away and we were in charge, right?

Just as I was wondering whether or not they would be back before sunrise, the six drunkards returned. Granted, some could handle their liquor (read, Tassies and Castle) better than others, but as a unit the noise was absurd for a group of people keen not to get bust. But that wasn’t enough. With absolutely zero consideration, they decided the smart move was to have a shower, to A) remove all evidence of the debauched evening on Main Road; and B) sober up. It didn’t occur to them how odd the noise of six showers running at 3am would seem.

Making a racket, they all helped each other over to the showers. It was around this time I got up to see if I could assist them and to assess exactly what we were dealing with. I strolled across the quad and up the stairs to the shower room. As I approached the top of the stairs I noticed a pair of very white legs poking out of a pair of blue Judrons. Not known for ever wearing shorts, there stood Mr. Bey, completing his ensemble with a white T-shirt. It seems he had beat me to it and the boys’ game was up. Not ideal…

So there I am at the top of the stairs, standing next to Mr. Bey, shaking my head, feigning disappointment as I barely managed to contain my laughter watching these hooligans. Stumbling towards us is Jonathan Grieve who is supporting (dragging) Phil Green under his arm. Please keep in mind everyone is stark naked at this stage of the game. Not a pretty sight, I can tell you. 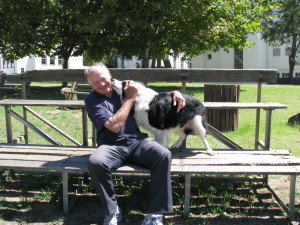 Mr. Bey then turns to me, demanding answers, “Richard, where have these boys been?” – “I have no idea, Sir,” I lie.

Of all the exciting moments and escapades that were had as a border at Bishops in those days, nothing quite compared to the buzz during breakfast as word spread about there being a bust the night before. As always, following these occasions, Mr. Bey would make an announcement after breakfast knock-up. “Could I please see Abbott, Wilson, Green ,Von Hoesslin, Grieve and Wright in my study.”

Grace came after the announcement, with the traditional “Amen” been replaced by “tssssssss” – the sound of a sizzling hot bottom after a meeting with Mr. Bey’s cane.

As usual the whole house was assembled in the quad to witness the action, as each perpetrator was summoned to Mr. Bey’s study. Abbott is first: ‘Whack, whack ,whack…’

The whole house counts as each lash is heard..

Wow – six of the best! This was a momentous occasion!

Next is Green. Six! 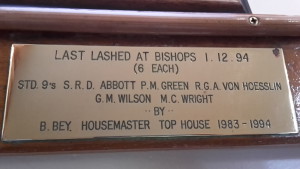 The house could barely contain themselves with all the excitement. Of course, each one walked out with their own unique reaction. Some tried (and failed) to keep a straight face, as if there was no pain. Others sprinted out, holding their newly-branded backsides.

Last was Grieve. He enters slowly and starts to bend. Mr. Bey then asks him, “Jonathan, were you not holding Green up and helping him last night?”

Spotting an opportunity, Grieve was quick to agree. “Yes sir!!” he shouts.

He strolled out, unscathed. The look on his face vs. Abbott and co. was pure gold.

When I asked Grieve years later about that day, he said that he actually wished he had been lashed, as it turns out the incident is now a part of Top House history and his name is not on the plaque which was made to remember that blessed day.

Part 19: A Tribute By Des Newton