A particularly festive post-match celebration saw us back at boarding school before lights out. Not wanting to alert anyone to the fact that our libations might have included something a tad stronger than ginger beer, I chose to have a little nap under a tree next to the boarding house.

My power nap, though, turned into a full-on night under the stars, and I was woken by a kick in the ribs by Suzie, our wonderful School house maid, who was pointing animatedly at the Memorial Chapel. With the bells signalling the start of that Sunday morning’s compulsory service already being rung, the little woodpecker in my head – courtesy of the celebration the day before – became the least of my worries.

By hook or by crook, though, I made it to the church on time, even managing the sip of red wine offered by Father Bands as part of Holy Communion. But, of course, I had now been ‘Bust’!

‘Bishops 1st team prop expelled’ was the Cape Times headline going through my head as I sweated out the next few days, waiting to be called in by the housemaster.

But I never was. Perhaps it was because that housemaster also happened to be our first team coach and he needed a tighthead prop for the next weekend’s game? Or perhaps it was because he believed in me and saw the naughty nap as a blemish rather than a character trait?

I certainly hope it was the latter, because that man was Basil Bey, and I certainly believed in him. 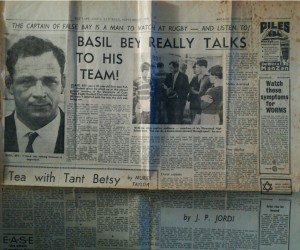 A newspaper article on Basil Bey and his coaching tactics.

Basil fell into a coma last week and died shortly thereafter. It was mercifully quick after a painful battle with cancer that was grinding him down.

A true rugby romantic, Basil would often call the rugby field a blank canvass, and then ask us to be the artists. He loved the fact that Bishops play without numbers on our jerseys, because all that did was pigeon hole a player into a role. Rugby may be a game for all shapes and sizes, but Basil expected all of us to be able to execute all the skills needed to play the game.

“Stop kicking the bloody ball away” was a line often heard in the Monday video session in the NLT as we players took to the boot more often than he would have liked in tight games. Sometimes it seemed as if he had more belief in us as a team than we as players did. And that was special.

Basil coached the Bishops 1st team from 1972 to 1998 and in that time enjoyed four unbeaten seasons. I was fortunate enough to play in two of them.

As Paul Dobson said in his tribute to Basil, “They played the most adventurous, exciting brand of rugby, known as Bishops rugby – rugby played with romance, enthusiasm, energy, skill and courage. His sides would scrum with power, tackle hard and handle with skill, and full of the confidence that freedom gives, they would do it all with a smile – rugby packed with enjoyment.”

Which is true, hence it being so much fun. But having given it hours of thought over the years, and most especially over the last few days, perhaps what Basil got most right on the rugby field was understanding that being powerful up front, and having a watertight defence, then enabled you to play an expansive game. 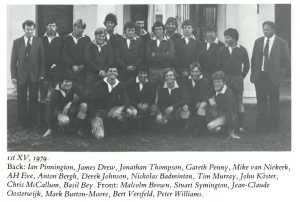 Most modern-day coaches see a strong pack and Fort Knox like defence as tools for a blunt force trauma type approach to the game. Instead, Basil saw these as a skeleton on which to hang a more adventurous, brave, ball in hand game. And when it worked, boy did it work!

“Same wretched side” was the notice he put up announcing the U16B cricket side on the Monday after a particularly severe pummelling from Fish Hoek High. He could, and probably should, have dropped all of us. Instead he chose to believe in us.

South Africa has lost a rugby legend, a great mate has lost a father, and I have lost one of the first guys outside of my wonderful family to really believe in me.

You played your shots, Basil Bey. Now rest in peace.

Part 18: A Tribute to Basil Bey by Richard Neville

Part 16: A Tribute to Basil Bey by Nick Koster
Scroll to top