Part 16: A Tribute to Basil Bey by Nick Koster

The name Basil Bey was often mentioned in our household while I was growing up. My father, John and uncle, Charles often reminisce about their days playing for Basil. They tell stories of being amiably invited for beers in School House during their matric year, where Mr. Bey was the housemaster. My father played for Basil in 1979 and my uncle in 1982. As a youngster I would hear about ‘running rugby’ – which to a ten year old with limited English at the time seemed obvious – running rugby as opposed to walking rugby? It was only later that I learnt to appreciate the true meaning of running rugby.

Mr. Bey was somewhat of an icon in my eyes, even before I arrived at Bishops. When I heard that in our u15 year we would be coached by him I was excited to experience the same privilege with the man I’d heard so much about. It was for this reason that I was so deeply disappointed to miss the year of rugby due to a lower back injury.

I spent the entire year on the side-lines and helped Mr. Bey with some of the coaching. But on the Friday night before the last game against Rondebosch I called my Dad to ask permission to play the last five minutes of the match on the wing. I remember him being very apprehensive, but when I said that I had always dreamed of playing for Mr. Basil Bey, he agreed.

I asked Mikhail Messaris, our u/15 left wing if I could come on for just the last five minutes of the match, and he kindly agreed. We lost the game, but almost won it in the last movement when a pass was judged to have gone forward. We lost, but tried valiantly. I went to Mr. Bey as I walked off the field and said that I am proud to know I have now also been coached by Mr. Basil Bey. He reacted in his normal, humble way. He looked me in the eye and smiled with his head tilted to one side, oblivious to the influence that he’d had on me.

It was this same humility that he showed at the unveiling of the new Heatlie Pavilion. An occasion was made to honour his colossal contribution, and a painting was unveiled with his unbeaten coaching years listed, to be exhibited in the Heatlie. He said a few words, adamant that it was all unnecessary and that he’d be far more comfortable with his name carved on the inside door of one of the bogs downstairs. 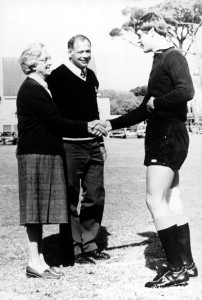 But in some ways I understand his reaction. While for many coaches it is a great achievement to boast four unbeaten seasons with a first team, this doesn’t begin to define Basil Bey’s coaching years at Bishops. Unbeaten seasons could never capture his influence, as he was never overly concerned with what the scoreboard said. He focussed on the journey more than the destination, and the journey was the way in which he encouraged us to play the game.

I learnt to play rugby the Basil Bey way – looking for space and exploiting it, balancing risk and reward, but always being more interested in the reward part. The instinct to ‘have a go’ entered our minds before the fear of failure did. Unsurprisingly, that changes when you play professionally. It is almost a different sport to the one we learnt at school. Nowadays rugby is all about gain line and set piece dominance, and particularly as a forward my success as a blindside flank is dependent on how well I can smash people back in defence and attack.

And I don’t blame coaches. The pressure on them is immense, they need to find short term solutions. Unfortunately short term solutions are often best instilled through a fear-driven culture, a culture where making errors is the enemy. The ruthlessness of the environment means they have to find ways to win, and they have to find them now. Building a culture of no fear by instilling confidence in the minds of players, and winning while doing so, can take years; and even if you have the vision to achieve it, you could be gone by the time that culture is established. The week-to-week pressure often clouds coaches’ judgement as they tighten their grip of control, further driving this culture of fear.

At Bishops we created our roles as we went. We were encouraged to think outside the box – to do the unexpected. The only system that mattered was a system that encouraged unpredictability. But this is not the case at most schools, kids as young as 13 are being taught to value winning over all else. I can’t even begin to describe how problematic this is – coaches adapting their coaching style to be conducive to results, blindfolding players and turning them into little robots that execute the coach’s plan.

Basil Bey was different. He focused less on winning and more on developing. He allowed players to express themselves and to make mistakes, because he recognised that there is no better way to learn and discover the limit of your talent than doing so. He inspired us to pursue a style of play that was poetic.

It takes a person of great courage to go against the trend. Society values winning above all else, but Basil stuck to his philosophy and never bought into winning at all costs. Winning soothes our ego, but he was willing to lose in pursuit of playing the game the way he believed was right. He saw rugby as an opportunity for expression. 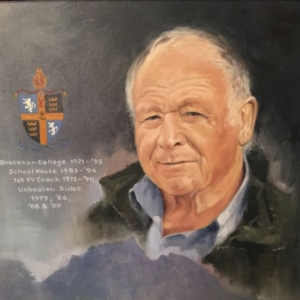 Richie Ryall’s painting of Basil Bey, with details of his teaching and coaching career at Bishops.

For these reasons, Basil Bey would probably never have been a successful professional coach, at least not if you measure success by win/loss ratio. But perhaps sometimes what you gain in influence, you lose in win percentage. And if success were measured by influence, Basil Bey is undoubtedly among the greatest there is.

During my school years I believe that we were true to the Basil Bey style of play. And who knows – it might have won us games we should have lost and lost us games we could have won. But it gave us an identity. I still speak with friends from Paul Roos and Paarl Boys about the days they played against Bishops. So often they talk of these days as some of the toughest they’ve had to endure, because of the expansive rugby we played. A friend from Paul Roos said his heart almost exploded in his chest on the Piley Rees in 2006, when we beat them. But perhaps not even winning can give me the sense of pride that knowing we did so playing with adventure. We moved these big Afrikaners from one side to the other in a constant bid to play a high-tempo, fearless style of rugby, until they could not stay with us any longer.

Basil spoke at my grandfather’s funeral in 2011, where he shared his belief that we come back to live multiple lives in order to progress to better versions of ourselves, until we are finally accepted into heaven when we reach our perfect self. He believed my grandfather was in one of his latter lives, and I believe Basil was too. I don’t know for sure whether heaven exists, but if it does, I imagine the two of them sitting up there with a beer in hand and talking only when it is necessary to do so – they were both men of few words.

Perhaps when they look down at the rugby I play now they will be saddened by the lack of creativity and expression. Maybe I owe it to them to go back to playing the way I did when I fell in love with the game, in order to be true to the influence that Basil had on my rugby career. The reason why I picked up a ball as a youngster was to run with it, to score tries and beat defenders. That is what excited me, and Basil Bey tried to access that excitement in every individual he coached – to keep them playing the game for the reason that first excited them.

Basil’s influence was so much greater than just rugby. He was far more than a coach or teacher. His philosophy tells us to stop focusing on that end goal (the scoreboard), and to be more concerned with how we play the game. Because life prepares us for a destination – that success or victory we work so hard for. And we get to that place, but realise we don’t feel very different, because we missed the point the whole way along. The beauty of life is to sing or dance while the music is being played, to play with freedom before the final whistle goes.

Basil Bey knew this the whole way through.