It is a challenge to write about a celebrated UCT sportsman who is also a good friend without allowing subjective bias to creep into the picture. It took a long time for me to mull over how I would present John Rushmere to Ikeys of his generation, and to subsequent generations. Finally, it dawned on me that a brief introduction to the man and his sporting career would fit the bill, followed by John’s own tale of what it means to be a very proud Ikey, and a snapshot collection of wonderful anecdotes of playing for one of the all- time greatest UCT rugby teams

I first saw John playing rugby in 1960 and with my customary brilliance as a talent scout (my rugby playing friends simply roll their eyes and grunt when I give my opinions on sport, and for that matter any other subject) predicted that he would be a lineout exponent like few. Lineout jumping is not as easy as the good players make it appear. It is a complicated process way beyond the comprehension of those fancy steppers called backline specialists, with one exception. In the good old days when hookers were positioned where they should be; with the forwards, the throwing in of the ball at lineout time was entrusted to the wings. After all, with the notable exception of UCT rugby teams, they did bugger all, except try and look speedy. Some wings were skilled at throwing in at lineouts. Some were not good to put it mildly. In my time a very fine UCT and W.P wing, Johnny Wootton was superb. 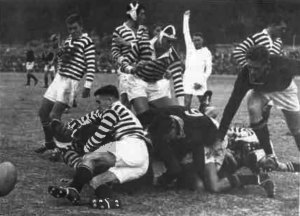 John Rushmere (middle bending down) in the 1961 Intervarsity won by UCT.

UCT produced a number of very fine sportsmen in the sixties, including rugby players, cricketers, athletes, squash players, table tennis and lovers… whoops, that slipped out! A handful of ladies of that era who met and mingled with Ikeys have testified to this fact, under oath, aided and abetted by lashings of Sauvignon Blanc.

John went on from UCT to play provincial rugby and cricket, both at a very high level in those halcyon days before professionalism polluted the spirit of sport. John was a very good cricketer, but rugby was always his first love in sporting terms. I watched him in the old Transvaal, in Port Elizabeth, and back in Cape Town in the period 1966 until he retired due to injury, and saw him develop from a speedy, athletic lock, supreme in the lineouts, into a seasoned all round lock who could mix it with the best, including the great Frik Du Preez. In my role as self-appointed Rugby Guru, I have no doubt that John should have gone to the U.K as a Springbok lock. In classic boxing terms, I declare ‘We wuz robbed!’ 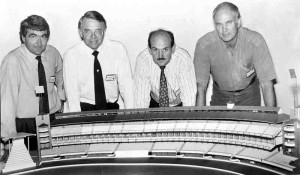 John Rushmere (right) with the Eastern Province Cricket Board.

The standout feature of John Rushmere’s philosophy in sport is that the sheer enjoyment, having fun, and the camaraderie is paramount. All exceptional sportsmen have a honed competitive edge, and John had plenty of that, but the friendships developed and sustained over the years were as important to him as the playing and winning.

It is my privilege and pleasure to share the anecdotes of John Rushmere:

What it Means to be a Proud Ikey: The Story of John Rushmere

My favourite rugby career memories are every minute I spent on the field wearing the famous UCT striped jersey. Maybe corny, but true. And I have a whole lot of truly wonderful and talented guys, and the greatest captain I have ever played with, to thank. Winning was always a distant possibility but it was the moment to moment joy that filled my soul

The Greatest Game Ever Played at Newlands

Apart from Coetzenberg 1961, there is one other game that stands out above all else in my memory: it was against Villagers at Newlands in 1961. Villagers had a very good that year, their Springboks included Doug Hopwood, Stewart, Charlie Nimb, John Gainsford, Bobby Johns, Lionel Wilson and Piet van Zyl. As a result, we lost that game. But what a game! It was error free, with everything true and splendid in the spirit and playing of the game, the skills, the speed, the imagination and the harmony, the challenge offered, accepted and returned in kind. When the final whistle blew, after a rare melee, 30 men stared accusingly at the referee who responded by telling us that he had already let the game run for an extra 10 minutes! Back in the change-room Dave Stewart, the captain of the Villagers side at the time, shook hands with each of us and then suggested we resume the match on the Tuesday instead of our normal practices. Amazingly, and at the same time, John Benn, the Ikey fly-half at the time, was suggesting exactly the same thing in the Villagers change-room. Needless to say it was disallowed. For the record, I think the score was 16-3, but nobody cared. It was touted by the Press and others as the best game ever played at Newlands. 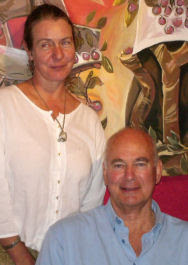 At the end of year dinner at the Glendower Louis Babrow told us that what we had experienced that year was a rare and beautiful thing which none of us would be likely to experience again. As usual, in my case, he was proved right.

I continued playing for Varsity in ’62 and ’63, and in January ’64 moved to Johannesburg for professional reasons. I hooked up with Wanderers, joining such illustrious names as Syd Nomis, Mickey Gerber and Hugh Bladen, amongst other very fine players. I was fortunate enough to be selected for Transvaal, then captained by Abie Malan. In 1965 I was made captain of Wanderers but suffered a setback when, playing for Transvaal against Western Transvaal, I was persuaded to play with a raging temperature. I knew I was in trouble in the first minute, landed up with pleurisy, spent three weeks bedridden and missed the Junior Bok tour to Argentina after being told I was a certainty. But other matters were concerning me then. During my tenure as Capt. of Wanderers, I had a close association with our president, Chick Henderson, and learnt through him just how far the capture of rugby by the Broederbond had proceeded. That is a subject for another time, but the president of Transvaal Rugby Union was a leading figure who was quoted as saying:” Wanderers en Wits is nie deel van Transvaal rugby nie”. His name was Jannie le Roux, a sinister figure with a political agenda who did a great deal of harm to Transvaal rugby.

As captain of Wanderers it was my privilege to speak at our annual dinner. Normally a light-hearted affair, I chose to use the opportunity to speak out against Le Roux and his corrupt executive being careful not to fall foul of libel laws. The response from the dinner guests, and later the broader rugby public, was overwhelming, with many emphatic that my remarks were long overdue. Gavin Fernie, another great Ikey man, will probably recall this. I refused to recant in the face of empty threats and posturing by le Roux and his henchmen, being within my rights to comment as I saw fit. The upshot was that I chose not to subject myself to his regime on principle, and I quit rugby in 1966.

Early in 1967 we moved to P.E, again for professional reasons, and joined the Crusader Rugby Club. That year l was selected for Eastern Province, beginning a lock pairing with Springbok Gawie Carelse, that was to last until I retired, – through injury – at the end of 1970. From 1968 until I retired I captained a strong Crusader team that challenged for honours each year and that included the best tight head I have ever played with or against, and as a re-treaded flank, the fastest – Ronnie Smith.

The 1968 Eastern Province side was the best provincial side I ever played for. None other than the great Frik du Preez, if asked, would agree. That was the side that beat Western Province at Newlands for the first time in Eastern Province rugby history. They were top heavy with Springboks including H. O. de Villiers, Gainsford, and crew. The reason we did not contest the Currie Cup final was bizarre, and a story for another day that includes that master villain, le Roux.

Talking of Frik, he and I had many a line out battle, one of which produced a neat anecdote. I was a front specialist but against Northern Transvaal I would move to five to mark the great man on his throw. His greeting was always the same: “F…Off Johnnie” and then we would jump. On this occasion I miss timed my jump, giving Frik a nudge in the back, collecting and feeding the ball; and as I followed it, a big hand came down on my shoulder with the words: “Née Johnnie, ons speed die bal, ne!” Sensibly, I did not repeat the manoeuvre, but the contest continued without rancour. A wonderful player and a great opponent. It must be stated that, unless provoked, Frik played it clean and straight and I enjoyed our contests. 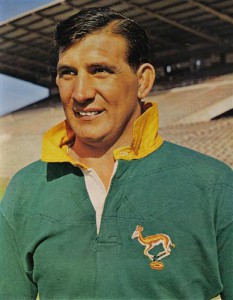 Other memories of matches played include, for Southern Universities against the 1962 Lions (Richard Sharp and crew); for S.A Universities against the Ox-Cams; and also in 1962, a tour of Rhodesia which we all hoped Basil would captain. It would have been a rich reward for a player who always represented the highest in all of us and showed the way for countless others.

Of course, I cannot omit to refer to the tour of Britain and Europe. Imagine having been absorbed into Transvaal and Eastern Province rugby cultures, far removed from the roots that shaped me as a player, and then, in the twilight of my career, to be reborn on an adventure where all that is noble in rugby was rediscovered and celebrated? Imagine looking around the dressing room and seeing the jersey again, on the shoulders of such Ikey luminaries as Louis de Waal, Ian McCullum, Gus Enderstein, Derek van der Berg, John le Roux, Stevie Hillock, Preston Robertson – I could go on, each one a special player and man; Louis a splendid captain, and Porky and Tom shepherding and aligning the parts into a whole. I was privileged to be a part of it. 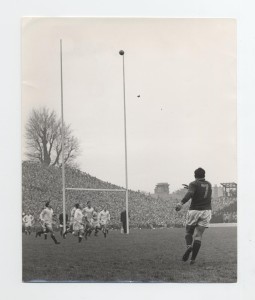 Finding Rugby: A Moment that Changed the Course of My Life

I very nearly didn’t play rugby. At school I had outgrown my strength and although I played and enjoyed it, the year I spent out of school before going to UCT I focused on tennis, with a view of continuing at varsity. It so happened that in 1958 there was a poor turnout of freshers for the rugby club, leading Paul Barnard (UCT Captain at the time) to canvas the residences. We Belsen boys gathered outside the mess while he climbed on a box. He pointed out that virtually all of us had “Rugby” on the tablets we had to wear around our necks and then asked how many had joined up. Embarrassingly about half a dozen raised their hands. He then asked who would now join. Being 6ft 6ish and very visible, it appeared that he was looking directly at me. My hand shot up in one of those moments that change the course of one’s life. Porky Wells then opened the door for me by seeing something in me that I didn’t know was there. What followed was pure exhilaration that never left me.

For me it was always the “playing”, never the result. I know I am almost alone in this, but my memories are garnered from countless hours of play and the enemy was always “the final whistle”, win or lose. Surely to be fully conscious in the moment of living, doing, being is where the potential exists to experience the fullness of life. To focus on the end just serves to foul the “now”, or to be effectively unconscious.