You are here: Home / Ikey Tigers / Interview with Josh Van Vuuren who earned his 50th cap 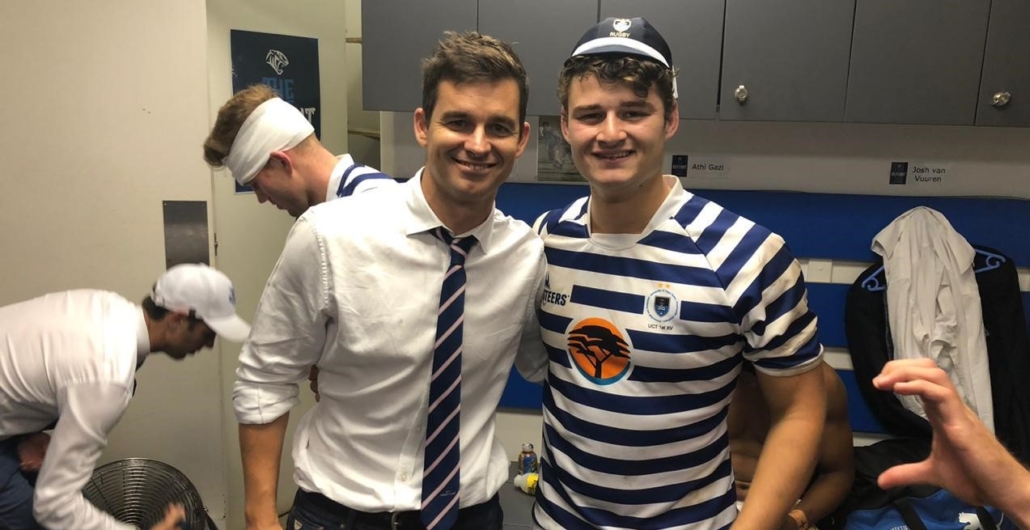 We sat down with Ikey player, Josh Van Vuuren, who earned his 50th cap. Here’s what he had to say…

What does it mean to you to earn your 50th cap for the Ikeys?

It was something very special to me. I always knew that playing for the Ikeys would be the pinnacle of my career, as I don’t harbour any ambitions to try and go professional. So, the fact that I got to achieve 50 caps was special for me personally.

Obviously it is an honour, as only 40 people have done it in the clubs history, but to be honest the number is not important to me, the fact that I have been able to be a part of the club for 4 years is the most special. The memories I have made both on and off the field will go down as some of my favourite of my varsity years.

What moment(s) would you pinpoint as your highlights during your time playing for UCT?
I think it has to be the tour to Japan in 2019. It was a unique team experience as we spent two weeks with each other. Which won’t usually happen in South Africa. This allowed the guys to bond and really grow as a team. I think the core team that came through from the 2019 team into 2020 was really close as a result of this tour and can be attributed some of the success we achieved this year.

Obviously touring another country with a rugby team is always going to be a good time. There were countless laughs on and off the field. I also think the correct balance was achieved in terms of rugby and having fun.

Winning the tournament was a great experience and experiencing a new culture was also lots of fun. The fact that the beers taste that much better when being drunk out of a trophy was just a cherry on the top.

Why do you play rugby? What impact has the game had on your life?
I have always been a sports fanatic. I think sport plays a vital role in one’s life to stay healthy. For someone like me, who hates going to gym and exercising by myself, I need team sports. I am also very competitive, the competitive nature of rugby in South Africa is probably what lured me to rugby compared to other sports such as cricket.

Rugby also makes one very busy, and I always say for me personally I am at my best when I am busy. It’s funny how when academics go well so does rugby and vice a versa.

Who’s the most talented Ikey you have ever shared the field with? Why?

I have shared sports fields with James since grade 9 at Kearsney. I would say he is one the most talented sportsman I know. But also, very down to earth about it. I think anyone who has been down to the green mile recently will have seen how good James is, and how much he has transformed the attacking powers of the team. I think its also important to note that he doesn’t take his talent for granted. He is often the last guy on the field after training doing extras in order to better himself.

How would you describe the spirit of the Ikey Tigers?
I think its very special. The fact that probably the most used saying that is thrown around the club besides “castle lite or black label?” is “to become better people” says a lot about the spirit of the club.

One of the club’s goals is to produce upstanding citizens that can make a positive impact in the world. Academics are always important for everyone and the management are aware of that.

Basically, what I can see at the club is that balance in life is important and emphasized throughout the club. When we study, we study hard, when we practice, we practice hard and most importantly when we jol, we jol really hard.

The fact that we are an amateur club, but can compete with clubs such as Maties, Tuks and False Bay is something very special. We must never lose that amateur side of the club while trying to achieve excellence on the field. I think the club is doing well at that at the moment.

Over your time at the Club, which Ikey would you say best embodied that Ikey spirit? Why?
I think over my time three players have. Duncan Saffy, Cuan Hablutzel and Stef De Gouevia.

They all achieved over 50 caps at the club, but at the same time achieved very well off the field. Both Duncan and Cuan held jobs while studying and playing rugby. These three were the definition of the balance that is so important at the club and it is something I have really wanted to achieve.

I think for someone like me who does not want to go pro, but still wants to play rugby at a high level while getting a degree the balance is so important. That is why I have chosen these three as I think in their own way, they all embodied the spirit that the club is trying to instil in players.

An extract from “Hooked on Varsity”
Scroll to top