You are here: Home / Ikey Tigers / 50 Caps for this Chap – Rayno Mapoe 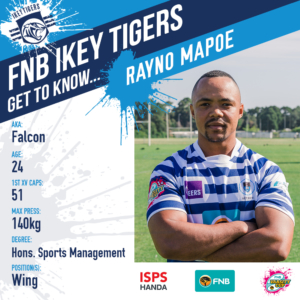 I think it is safe to say that Mapoe is basically part of the furniture of UCT Rugby. He has been part of the Varsity Cup team for six years; starting with the Young Guns in 2014 and now for the first team. It is no wonder he has hit fifty caps!

“Make friends in lectures, calling someone for the notes and catching up like that. In your free time getting done what you need to get done. Don’t work hard, work smart.” – we definitely think that this attitude is a winning formula.

If Mapoe is not training with the team, you’ll probably find him in the gym or doing any outdoorsy activities. But if he is looking for some serious downtime, he’ll crack open a cold one with the boys or catch up on Netflix.

On Mapoe’s 50th cap, he admits that he was a little more nervous than usual and “it felt a bit like the first time I came on the field;” a feeling he was trying to avoid commenting that “my first 1st team game did not go well.”

But upon reflection, Mapoe explains that his 50th cap was a bit surreal because if his first match was anything to go by, he felt he should never have played for the 1st team again!

For now, Mapoe intends on just enjoying his last few months of playing for UCT and hopefully play in a provincial set up next season.

If his skills, charisma and talent is anything to go by, we recommend you become friendly with Mapoe before he becomes famous!