Blog - Latest News
You are here: Home / Newsflash / Winds of change on the Green Mile 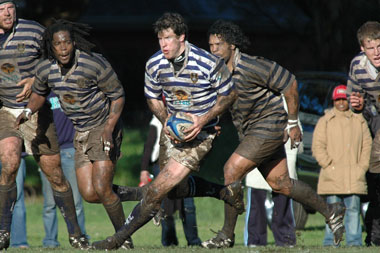 The Varsity Cup is over and it is time for the Super League again – the Ikeys bread an butter after the limelight. The Varsity Cup is of course an U25s University Tournament, the league on the other hand is open and more players are available for selection – but, where are they?

The 2008 and to a lesser extend the 2009 league seasons were carried by a number of experienced senior players – 1st team veterans of many seasons, but it seems that 2010 is the time for the Varsity Cup “youngsters” to fully step up to the rough and tumble of the league.

It is a natural progression and all of the younger players who drew first blood in the 2007 and 2008 seasons are now three years older, more experienced and more than capable to compete in the slower, more physical Super League.

However the squad will have to do without a large number of players who have hung up their boots or moved away:

Jody Burch (27):
The burly backrow forward made a big impact on the Green Mile, with his commitment to the team as well as running over opposition. He was called up to play Currie Cup for the SWD Eagles and now plays Vodacom Cup rugby for WP again.

Dave Clayton (28):
The skilfull fullback who has made an immense mark on the Green Mile has hung up his (serious) rugby boots to focus on work. Talented as well as experienced he has previously played for Leeds Tykes, Saracens as well as Pumas and SWD Eagles in the Currie Cup. DC broke his hand in the 2009 season which forced him out of a couple of games – he has had a second operation earlier this year.

Dave Edgar (27):
The temperamental outside center who has one of the best passes in the Province is also taking a step back from rugby and focuses on his career. Dave has played Vodacom Cup as well as Currie Cup for WP and was part of the Ikeys team that won Intervarsity 2004 and an integral part of the 1st team for many years.

Vakai “Fish” Hove (29):
Fiiiish, a legend in the Blue and White and one of the most capped UCT front rankers has returned to Zimbabwe. Fish has played rugby for WP in the Vodacom Cup as well as for WP B and donned the Tiger Stripes many extremely competitive years for the Ikeys 1st team. Read more on him here.

Craig Kleu (27):
Crusty the hugely physical flank has hung up his boots (for now) to focus on work and finish his studies – one of the stand-outs at UCT for years, he has played Vodacom Cup rugby and managed a powerful comeback after a very serious car accident saw him out of action for over year.

James Martin (27):
The center with a magical x-factor has made his mark as an attacking weapon in the 2008 Varsity Cup and league as well as the 2007 season. He saw little action in 2009 coming back from a serious leg injury and has now retired to focus on his career.

Herbie Mayosie (27):
Hoover was the Forward of the Tournament in the inaugural Varsity Cup of 2008 and earned himself a place in the SA students team. The former Wynberg pupil, now lawyer has moved on to False Bay.

Mike Passaportis (24):
Passa has moved to Kimberley to play for Griquas in the Vodacom Cup – despite his young age, he is very experienced,  having previously previously played Vodacom Cup for WP, some Currie Cup for EP and Super 10 rugby in Italy.

Dylan Rogers (26):
DGuy, the versatile prop, UCT veteran and legendary fines master has also been snapped up by Griquas where he joined Passaportis in the Vodacom Cup side.

That leaves only two of the so called seniors to be called back into the squad:

Luzuko Panya (27):
The skilled flank has been a stand-out for UCT in the 2008 and 2009 Varsity Cup and league campaigns which earned him some SA students caps. Having previously played for WP B, he was called up to support the EP Elephants in the Currie Cup in 2009 and is back for more of the Blue and White and also returned to continue studying at UCT.

Bodo Sieber (31):
The experienced lock who captained the team in the 2009 league has taken on a coaching role, looking after line-outs during the VC. “The Door” is probably the player with the most UCT 1st team caps in history – apart from having played rugby for WP in the Vodacom Cup as well as for WP B and first division in Ireland he also has 22 caps for his native Germany where he played in World Cup qualifiers and Six Nations B matches. Having recently become a father his commitment will be time permitting.