UCT RFC were very honoured to have Ikey old boys Dave Wessels and Kevin Foote bring the Melbourne Rebels to the Green Mile and the refurbished Ikey Pub for a strategy session earlier in the month. Dave and Kevin also attended the final games of the IPL series, as close friends and ongoing supporters of the Club. Here’s a reminder of the journey and success of these two Ikey legends: 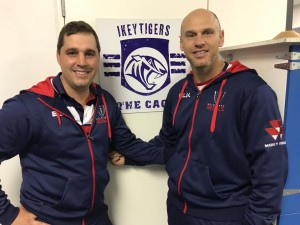 Dave is currently the head coach of the Melbourne Rebels team that plays in the Super Rugby competition. He was previously head coach at the Force, and co-head coach of the Perth Spirit for Australia’s National Rugby Championship.

Dave was a defensive consultant to the Stormers in 2008 and 2009, before being appointed as an assistant coach at UCT (Ikeys) in the Varsity Cup from 2009 to 2011. He moved to Australia as a defensive consultant to the Brumbies under head coach Jake White in 2012, and had a significant influence on the rejuvenated Brumbies with the team conceding the fewest points in the Australian Conference, and the second least in the Super Rugby competition. 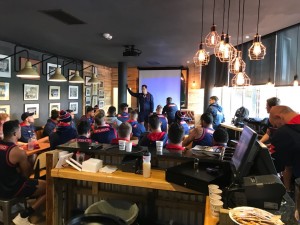 Following the Australian Rugby Union’s decision to exclude the Force from Super Rugby after the 2017 season, he joined the Melbourne Rebels as head coach in September 2017. Dave’s move to Australia came around by chance. He met Jake White some years ago while working for the magazine ‘Sports Illustrated’. Jake was doing an interview with one of the journalists and as Dave got up from his desk, they ran into each other in the corridor. Jake knew who Dave was as he was coaching University of Cape Town in the Varsity Cup at the time. They had a quick chat that turned into sitting in the board room, drawing out different concepts for a couple of hours. Later, when Jake got the Brumbies job, he asked Dave if he wanted to go with him. That is how he ended up as Brumbies defence coach in 2012.

Dave has earned a reputation as a top coach and is being mentioned as possible future Australian coach by many Aussie pundits. 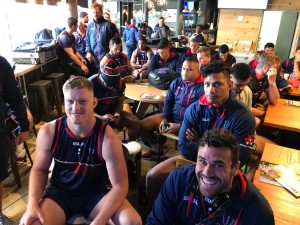 Kevin has 43 caps for the South African sevens team between 2002 and 2004. In 2005, Kevin had a brief stint with the Sunshine Coast Stingrays club in Queensland before he returned to Cape Town to play for UCT (Ikeys), captaining the Ikeys team in the Western Province Super League from 2005 until 2007. After suffering a bad leg break, he retired from playing rugby and set his sights on coaching.

Kevin was an assistant coach at Ikeys from 2008 to 2010. He was promoted to head coach in 2011, guiding Ikeys to their first Varsity Cup title. He then moved to Australia as a defensive consultant to the Western Force in 2013, and joined the Force full-time as the backline coach from the 2014 Super Rugby season. He was also appointed, alongside David Wessels, as co-head coach of the  Perth Spirit for the inaugural season of Australia’s National Rugby Championship in 2014.

In 2017, Kevin was then appointed his current position as the defence coach at the Melbourne Rebels team for the 2018 season.

“I always hold my experiences and memories of UCTRFC extremely close to my heart. I know that my time at the Ikeys has set me up to be extremely determined and pretty resilient – never compromising on being a good person and fighting for being better both on and off the field. I often think about my journey at the club from 2005 and every year has a special chapter. I think about the people all the time – Players; Coaches and Elders who guided the club to where it is today.

I look back at the 2011 season and think about travelling to Pretoria to play in the final of VC; or the run of games we strung together to win the league. If I feel down I think about people like John Le Roux, Neil McDonald, Phil Kilroe, Alan Solomons, Dave Mallett; John Dobson; Paul Day, Prof Noakes and Dugald McDonald… all the wisdom and love they showed me through all my different journeys as a coach. It is because of these people that I live my dream every day, and for that I am extremely grateful.”

It was great to have these old boys back home and to catch up with Ikey friends. Once an Ikey always a Tiger…

Reflecting on the 2018 Varsity Cup
Scroll to top