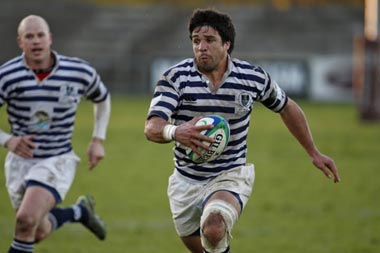 As Boland and the Leopards prepare themselves for their annual promotion/relegation scraps against the best of the Currie Cup First Division, ask yourself this question – would a ‘Best of’ Varsity Cup XV have fared any worse than either of those two teams in the 2009 Currie Cup?

The answer to that question would have to be a firm ‘No’, especially with the likes of De Kock Steenkamp, Kyle Brown, Derick Minnie, JJ Gagiano, Juan de Jongh, Robert Ebersohn and Mat Turner – to name just a few – having gone on to bigger and better things since the inaugural Varsity Cup last year.

For example, new Western Province lock Steenkamp did not play Varsity Cup rugby this year, so he cannot be selected for our composite team, and neither did former UJ star Minnie, who has been in fine form for the Lions this season.

Another man not considered in our Varsity Cup XV is silky Ikeys back Tiger Bax, as he did not play Currie Cup rugby – he featured in the Super 14 ‘only’ and this selection is purely for the Currie Cup. (Potatoe, potatoe we know – but we’re sticklers for consistency here at varsitycup.co.za!)

As one would come to expect, the Maties – the back-to-back Varsity Cup champions – produced six new Currie Cup players this season alone.

Interestingly, however, is the fact that just two of those six players played for Western Province (Maties’ home union); the other four ‘transferring’ to Boland and Griquas for their taste of Currie Cup action.

The Lions, in a rebuilding phase under former Springbok coach Jake White, benefitted from the Varsity Cup this year; with Earl Lewis (pictured, top right), Pieter Engelbrecht and Johan Jackson all graduating to the Currie Cup via the Varsity Cup in 2009.

However, of the three, only Lewis is a local player, with Engelbrecht (Cape Town) and Jackson (Pretoria) being head-hunted from other Provinces.

The Varsity Cup has helped increase the depth in South African rugby and either way you look at it, this team – based purely on the 2009 season – is a pretty damn strong unit.

Well, why don’t you decide for yourself…

Varsity Cup-based Currie Cup XV:
(Based on the 2009 season alone.)

15 Earl Lewis (Lions & UJ):
The hot-stepping UJ ace made an assured start to his Currie Cup career as a replacement for an out-of-sorts Earl Rose in the Lions No.15 shirt. A knee injury cut short his 2009 season, but remember this kid’s name for the future.

14 JJ Engelbrecht (WP & Maties):
The young Maties speed merchant scored a try on debut against Boland, having come on as a replacement just a few minutes earlier. An ankle injury picked up during a pre-game warm-up ended his 2009 season prematurely, but it was a solid enough start and there is more to come from him.

13 Paul Bosch (WP & Maties):
The powerful former Pukke star has had limited game time in WP’s Blue & White hoops since making the move from Potchefstroom to Stellenbosch. However, he remains a prospect and will feature again for WP – and maybe even the Stormers? – in 2010.

12 Pieter Engelbrecht (Lions & UCT):
Engelbrecht took his chances when he was snapped up by Lions coaching ‘consultant’ Jake White – who helped out at UCT during the 2009 Varsity Cup. The powerful Ikeys back impressed from the bench and in the few starts for his new team.

11 Johan Jackson (Lions & Tuks):
One of the success stories of the struggling Lions, the speedster will be hoping for Super 14 game time in 2010.

10 Cecil Dumond (Leopards & Pukke):
The (joint) second highest points-scorer in the 2009 Varsity Cup was a shining light for the otherwise struggling Leopards during the 2009 Currie Cup season.

9 Donald Stevens (Griquas & Maties):
Stevens, the 2009 Varsity Cup Player of the Tournament, transferred to Griquas during the Currie Cup season. The livewire No.9 found his game time limited, however, due to the presence of Sarel Potgieter – Griquas’ most influential player.

8 JJ Gagiano (WP & UCT):
The USA international was part of the greater Western Province Currie Cup training group, but never got to play in the Blue & White hoops due to his Test duties. No other No.8 from the 2009 Varsity Cup played in the Currie Cup, however.

7 Wesley Wilkins (Griquas & Maties):
The hard-working Maties skipper made his Currie Cup debut for Griquas against the Bulls at Loftus Versfeld on Saturday. His opponents in the Bulls back row? Two Boks (Pierre Spies and Pedrie Wannenburg) and two future Boks (Dewald Potgieter and Deon Stegmann)… talk about a baptism of fire!

6 Enoch Panya (Mighty Elephants & UCT):
A vital cog in the UCT pack in 2008 and 2009, Panya spent the latter part of the 2009 season campaigning for the Mighty Elephants in the Currie Cup First Division.

5 Martin Muller (WP & UCT):
The giant former Bishops scholar played Super 14 rugby for the Stormers before making his Currie Cup debut for Western Province later in the year. A lot is expected from him in 2010.

4 Grant le Roux (Boland & Pukke):
Le Roux, the 2008 Potchefstroom University Player of the Year, made the move to Boland at the start of the 2009 Currie Cup season.

3 Michael de Neuilly-Rice (Boland & Maties):
Having come through the ranks at Western Province, the two times Varsity Cup winner eventually made his Currie Cup debut for neighbours, Boland. (De Neuilly-Rice is primarily a loosehead prop by trade, but we have selected him to do the job at tighthead prop in our team.)

2 Dayne Jans (Lions – trial & UCT):
The joker in our pack – literally. The naughty Ikey had a trial with the Lions during mid-year, having been asked to do so by Jake White. Jans did not feature for the Lions, instead returning to Cape Town (and the WP Under-21 team) after his trial period, but – amazingly – he came the closest of all Varsity Cup hookers (2008 and 2009 included) to playing Currie Cup rugby.

1 Johan Roets (Boland & Maties):
Maties powerhouse Roets, like De Neuilly-Rice, made the short trip from Stellenbosch to Wellington in order to earn his Currie Cup spurs.

Coach – Robbie Fleck (WP & UCT):
‘Fleckie’ has made giant strides in the coaching world since last year’s Varsity Cup when, along with head coach John Dobson, the Ikeys caught everyone else napping with their exciting brand of running rugby. Judging by WP’s Currie Cup success this year (and his involvement), Fleck seems destined to be involved in the 2010 Super 14 with the Stormers, which means the Varsity Cup will be that much poorer without him.

What do you think of this selection? Would they have a chance in the Currie Cup? Add your comment.

UCTRFC Old Boys – What happened to Raynn “The Rhino” Bruce... The question is could they beat Boland o
Scroll to top