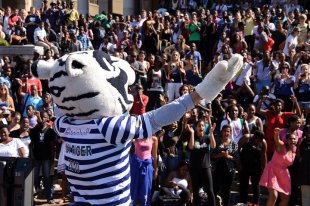 The Ikey Tigers, the newly-crowned Varsity Cup champions, celebrated their success in fine style on campus at the University of Cape Town last Thursday afternoon.

Captain Nick Fenton-Wells, the entire playing squad (everyone who featured at some point in 2011) and the management team – across the board – officially presented the Varsity Cup trophy to their loyal fans on the Jammie Plaza – the heart of UCT’s upper campus.

UCT Vice-Chancellor Dr Max Price addressed the crowd and Prof Crain Soudien handed over the trophy, Fenton-Wells thanked all the team’s supporters, and they then lifted the trophy – much to the delight of the thousands of people present at the Meridian.

Aside from thanking the fans for their support, Fenton-Wells invited everyone to join the squad for the official after-party at Tiger Tiger on Thursday night, whilst Dr Price – who has been very supportive of the team throughout – urged everyone present to follow the example of the Ikey Tigers and to replicate their success across the board at UCT; academically and in other sporting codes.

Also present at the trophy presentation were broadcasters SuperSport and local media – including Eyewitness News, who do the reporting for radio stations KFM and Cape Talk.