UCT has a long tradition of playing the major rugby universities before the introduction of the Varsity Cup Competition.

Games over the years between UCT and Tukkies, Wits, Shimlas and Rhodes were a feature of the best inter university rugby played in a fiercely competitive spirit, but always with the underlying emphasis on amateur rugby at its best, depending upon the different styles and cultures of the different universities.

Fierce clashes occurred against Tukkies in particular. Tukkies being the showpiece and nursery of Northern Transvaal rugby, aided and abetted by the very strong Northern Transvaal club rugby system, produced a stream of pr
ovincial and Springbok players.

One game between UCT and Tukkies stands out. In the early to mid- seventies UCT went through one of its purple patches. In 1974 and in 1976 the UCT First XVs were tremendously strong and skilful, with the rare luxury of tough, powerful tight forwards and outstanding loose forwards to sing alongside the brilliant backline of that era.

In a pulsating game against a Tukkies team loaded with provincial players and a sprinkling of current Springboks, including Daan Du Plessis and Johan Spies, the UCT pack destroyed their highly-rated opposition. The famous photograph of the Tukkies pack in complete disarray, with Daan Du Plessis elevated skywards by the UCT pack is worthy of being posted up on the wall of the UCT Rugby Clubhouse in giant size (see below).

UCT has produced a number of outstanding teams which over the years pursued the Ikey philosophy of rugby being a game in which the players play for the sheer enjoyment of the game, to play a style of Basil Bey rugby, and to produce young men who gave it their all for their team, and went out into the big, wide world well equipped to realise their full potential.

With the Ikeys having played against Tukkies this past Monday, and being scheduled to play against Wits this coming Monday, as part of our ‘History Series’ we take a look at the two most memorable games throughout history with these universities. 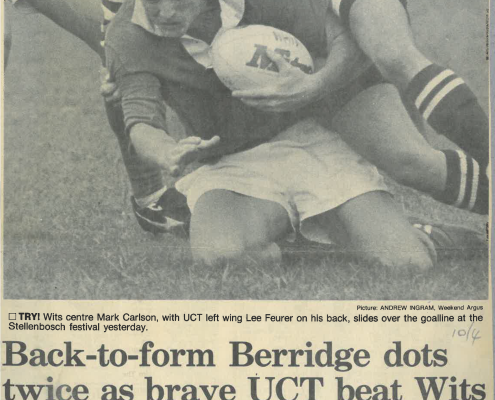 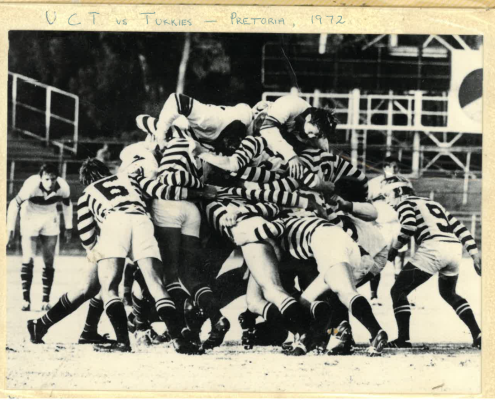 Ikeys excited to run out one last time
Scroll to top