You are here: Home / Newsflash / Beating the Odds: Varsity Cup 2018

The Ikeys narrowly missed out on a semi-final place by just two points in Mondays game, after being beaten in the unofficial quarter final 18-17 by UJ. A win by the Ikeys would have resulted in them ending fourth and meeting the Maties in the semi-final.

The final statistics reflect that the Ikeys have played 8, won 4, lost 4 and ended in sixth position. However, this does not reflect how well the Ikeys did this season, games being lost by small margins, games which could have gone either way. This team never gave up in any game and played to the final whistle, playing with courage and determination. They deserved a lot more results wise than they achieved. Many rugby “pundits” were predicting the Ikeys would be relegated this year, but they ended up competing for one of the top spots. As the Captain of Wits so famously said “The guys played with enormous testicles…” which definitely applies to this Ikey team.

The thing that has stood out for the Ikeys in this year’s Varsity Cup so far, is the fighting spirit and physicality of the whole team. Even in defeat you cannot be anything but proud of the effort and courage of the players wearing the blue and white stripes.
. 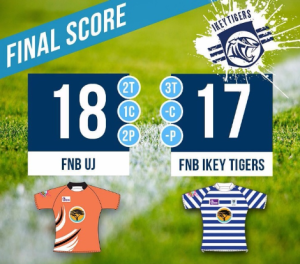 FNB UJ qualify for the Varsity Cup semi-finals after edging FNB UCT Ikeys 18-17 in Johannesburg on Monday. Both sides started the game nervously. With every attack it seemed as though FNB UCT could score but the home side’s defence remained resolute to keep the men from Cape Town getting over the line.

FNB UJ winger Tatendaishe Mujawo sent a message with a physical display on defence. FNB UCT played intelligently throughout the
game managing to break the line well. The home side scored the first try of the game through star scrum-half Bradley Thain. Their lead was short lived though, with FNB UCT halfback Pieter Schoonraad managing to grab a try of his own which levelled proceedings.

FNB UJ took the lead after half-time with fly-half Kobus Engelbrecht managing to slot two successive penalties, giving his side a handy six-point cushion. FNB UCT weren’t down and out yet though, as FNB UCT replacement David Meilhuizen scored a seven-pointer which put FNB Ikeys in the lead, on the 60-minute mark, shifting the momentum towards the away side.

But it would be FNB UJ flyer Tatendaishe Mujawo who would have the last laugh, with the Zimbabwean born-winger scoring a five-pointer in the 66th minute which would be the last point scored in the game. 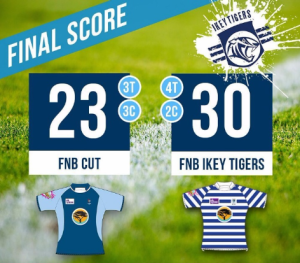 FNB UCT claimed some valuable ground on their opponents on the log with the win, putting them only one win from a semi-final
spot. UCT Ikeys lead 23–7 at half time after controlling proceedings in the first 40 minutes, but FNB CUT fought back in the second period.

FNB CUT scored two tries in the second half, one of which was a 7-point try scored and converted by full-back Dimitrio Tieties. Was it
not for a terrier-like defence by the visitors, FNB CUT could well have pulled off a surprise victory.

FNB UCT scrum half Pieter Schoonraad was outstanding, scoring two tries and deservedly being awarded “the Player that Rocks”. Initially, the Ikeys dominated the scrums, but the FNB Ixias found good momentum and contested well later in the match. FNB UCT Ikeys stole a number of FNB CUT line outs balls, from where numerous attacks were launched into FNB CUT territory. Late in the game tall lock David Meihuizen won a crucial lineout ball against the throw.

But FNB UCT were able to hold the hosts and claimed a valuable four log points with the victory. 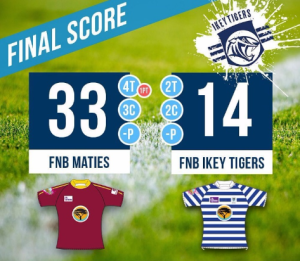 FNB Maties got back to winning ways when they beat FNB Ikeys 33-14 in Stellenbosch. It took just two minutes for the first points of
the game to be scored. FNB Maties wing Duncan Saal scored after inside centre Chris Smit powered through the FNB Ikeys defence
and found Saal in support for a seven-point try which was unconverted by flyhalf Chris Smith.

The game was certainly not wanting for intensity and physicality – FNB Maties with the upper hand at set-pieces. They would make that advantage count in the 18th minute when they were awarded a penalty try after yet another dominant push at scrum time.

By the 26th minute of the game FNB Maties had raced to a 21-0 lead. On more than one occasion, FNB Ikeys’ decision making and accuracy let them down. They had a chance to score early in the first half and then again on the half-hour mark. Both those chances unconverted into points.

On the other hand, FNB Maties were making their dominance felt. Eighth man Stephan Streicher scored on the stroke of half time to give the home side an unassailable 26-0 lead. Janco Venter’s try early in the second-half confirmed the win for FNB Maties but not before an FNB Ikeys’ fight back.

FNB Ikeys hooker Cuan Hablutzel pulled a try back for the visiting team to give some respectability to the 33-7 score line. The second FNB Ikeys try would come in the 67th minute when FNB Maties were down to 14 men with lock Johan Momsen in the sin bin. That would be the last time FNB Ikeys would get onto the scoreboard as FNB Maties punished an errant FNB Ikeys team 33-14 and with that FNB Maties have consolidated their place at the top of the log. 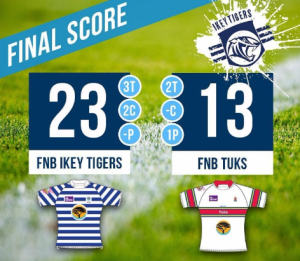 FNB UP-Tuks’ hopes of reclaiming the Varsity Cup were all but lost after being handed their fifth-straight defeat by FNB UCT, 23-13, at the Green Mile on Monday evening. FNB UP-Tuks came out of the blocks firing in the first half with the men from Pretoria getting onto the scoreboard first. The FNB UCT defence was resolute in the opening half, keeping FNB UP-Tuks at bay until FNB UP-Tuks full-back broke through the line to score.

David Manuel’s men held their lead well before conceding a try through FNB UCT captain Josh Moon which was converted by wing Karl Martin. FNB UCT flank Xaba Kuyenzeka scored moments later which marked the end of FNB UP-Tuks lead with the eventual FNB Player That Rocks taking the score to 14-13 once the conversion was made by Martin.

FNB UCT outside centre Liam Furnis scored the only 7-point try of the game making the score 23-13 to FNB UCT.