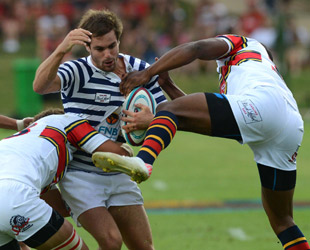 Defending Varsity Cup champions FNB UP-Tuks got their 2013 campaign up and running with a 24-16 victory over a determined FNB UCT side in Pretoria on Monday.

After last week's defeat to FNB NWU-Pukke in Potchefstroom the star-studded UP-Tuks needed an emphatic response, and they obliged by scoring three tries against a fired-up Ikeys team.

The home side struck early when a powerful driving maul saw No.8 Jean Cook crash over for a well-worked try, but those were the only points of the first half as both sides threw everything at each other without further reward.

UP-Tuks doubled that advantage straight after half-time in almost identical fashion, with flank Shaun Adendorff driven over the line  to put them 16-0 ahead.

The Ikeys hit back when impressive hooker Michael Willemse spun out of a tackle at close quarters to burst over for a try which brought them back within range at 16-8.

Oliver Kebble came on for UCT and his carries were impressive. The Ikeys were attacking close to the line, but in a tackle David Ambunya lost the ball forward.

Courtnall Skosan grabbed the ball and raced down the empty acres to score 95 metres away which made it 24-8 with 14 minutes to play. World champion Baby Bok flyhalf Handré Pollard had replaced Tian Schoeman and he converted the try.

But still the Ikeys came back. Replacement fullback, Lihleli Xoli, who looked full of running, started a counterattack on the left.

He tacked towards the right. There was a tackle in midfield and replacement scrumhalf Rick Schroeder dummied and broke past three.

He passed to Dillyn Leyds on his left and the tall fullback, now playing flyhalf, was too fast for Clayton Blommetjies and scored under the posts which made it 24-16 with three minutes to play.

UP-Tuks controlled the last three minutes and with time up Pollard hoofed the ball away to secure the victory, whilst UCT took a bonus point from the game after a committed display.