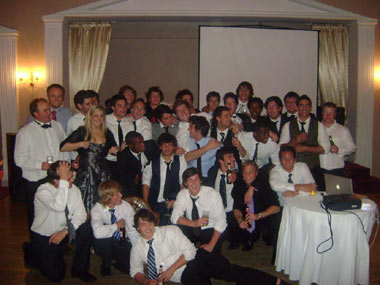 The league winning U20 A1 team, were awarded with the 2009 team of the year award.

Last week’s rugby dinner  was held at Kelvin Grove – which albeit 4:1 odds against, is still standing unharmed – it was attended by a record 150 players, managers, physions, coaches and partners.

New club captain Dylan ‘Diligent Guy’ Rogers with the aid of Bodo Sieber and many others, including the excellent crew at Kelvin Grove has revived a great varsity tradition. First team coach John Dobson was one of the many guests who enjoyed every minute of the festivities that included, awards, speeches, great food and an epic Ikeys party. Ikeys star and Springbok Sevens player Kyle Brown, Rob Fleck, Hanyani Shimange as well as a whole host of UCT’s WP U21 players also didn’t miss the opportunity to celebrate with their club.

Dobson, the visibly impressed survivor of many a rugby dance said: “It was the best Varsity dance I have been to in my time with the club. The class of the event in a uniquely UCT and witty style was magic”.

The players and officials went all out in Black Tie & T style, as did their stunning partners and even first team Mascot Dan Kessler.

There is a lot to look forward to in 2010 – much of which was illustrated in Bodo “The Door” Sieber’s presentation on the night – but it is fair to say one of the highlights will certainly be the 2010 end of year dinner, which if diligent sources can be believed is already being planned.

The 2009 season had plenty of highlights, a heartbreaking varsity cup semi final, the matches vs Saracens, a 16all draw agains Maties at Newlands and of course the league titles that were clinched by the U20A1 Trojans, U20 Babrows and the famous Marais team.

The club’s outstanding performers – as well as some chokers, jokers and tow-truck drivers – were awarded on the night of the dinner. Below the list:

MVP – Most valuable u20 player
Doug Mallet (A1 Trojans flyhalf)

Team of the year

A1’s closely followed by runners up the Babrows

Personality of the Year
Dayne Jans and Dylan Rogers

Alan Solomons Trophy for Service to the club

The question is could they beat Boland o