Blog - Latest News
You are here: Home / Newsflash / UCT with changes for Villagers 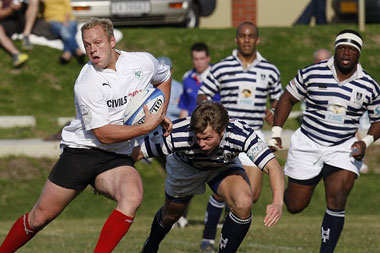 Back at Brookside – Matt Rosslee, Marcelo Sampson and Hanyani Shimange (photo Peter van As 2009)
UCT take on Villagers tonight at Brookside with a changed and reshuffled team.

Coaches John Dobson and Kevin Foote had to test the club’s depth following injuries as well as exam and illness related withdrawals and it is testament to the amazing strength of the squad that the Ikeys can field a very potent and exciting team. The squad has had to do without the likes of Stu Commins, Greg Mallet, JJ Gagiano, Dayne Jans and Therlow Pietersen who are still injured or unavailable.  Sean van Tonder and Pete Haw are also not in contention tonight due to exam commitments.

With regular skipper Nick Fenton Wells still sick and veteran, stand-in captain Bodo Sieber also joining the sicklist Don Armand will debut as captain. He will lock down with Martin Muller, Levi Odendaal is back in the 22, covering from the bench.

Stormers stars Tiger Bax and Nick Koster are both out injured, so Marcel Brache moves to fullback and Greg Mallet moves up to the bench in place of Koster.

Adrian Kritzinger who has had a storming come back from a lengthy lay-off will debut for the 1st team at inside center, taking over from Brache and forms an exciting combination with Mark Esterhuisen in midfield.

Dylan Rogers gets a start following his return from the Griquas and will add further experience to a strong front row combination with Hanyane Shimange and Ashley Wells. Luzuko Panya is also back on the flank replacing the injured Zandy MacDonald.

The first team match kicks off at 21.00 – see all match times below.