On the back of a very successful 2014 season the club was avidly awaiting the 2015 season. An extremely keen group of players assembled for the Varsity Cup pre-season. This year, the senior and junior Varsity Cup groups trained together for much of the pre-season. This afforded the juniors the opportunity to witness the intensity that was expected of them, and pushed the seniors to step-up.

The Young Guns Varsity Cup competition is incredibly harsh, in that by losing a single game your chances of making it through to the playoff rounds are unlikely. In the end they were left with the challenge of having to beat PUKKE by more than 50 points to make a semi-final. Unfortunately the boys fell short ending their competition. They were a young side, with the majority of the team returning next year- definitely a great team to watch in 2016! The Senior Varsity Cup team gave everything in an attempt to retain our Varsity Cup title, but unfortunately fell short in the semi-finals to the eventual winner, Shimlas. The team played patches of wonderful rugby, most notably beating PUKKE convincingly in Potchefstroom, playing superb flowing rugby. 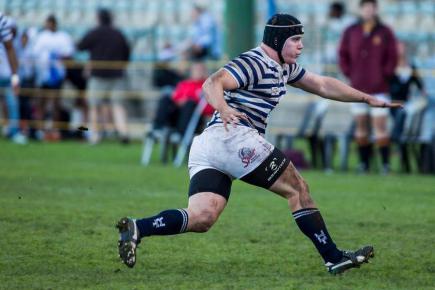 Digby 'Diggers' Webb in action on the Green Mile

The Intervarsity clash with Maties during the Varsity Cup was an amazing spectacle, attracting one of the biggest crowds ever on the Green Mile! The league has been very special this year with a remarkably strong senior section – all challenging for their respective league titles. The u19 team, under the guidance of Tom Dawson-Squibb, Dave Mallet and Josh Carew have excelled and are currently chasing the title in the u20 section! The 3rd XV have regularly produced cricket scores, including this past week in which they played two games, scoring 240 points and conceding none! The 2nd XV will be playing for the SLA title in their final game of the year against False Bay on the 5th September. The 1st XV has had a very strong second half of the league, winning all their games and taking a bonus point each time.

They will be rueing their slip of concentration in the first half which saw them fall short in a game that was theirs for the taking! The second half of league has seen the team go back to the ‘running rugby’ that Varsity is known for and, as a result, some spectacular tries and big scores have been recorded.

The club attended the USSA Rugby Week in Joburg over the mid-year holidays. As is tradition we use this tour to blood youngsters and invite a few seniors to show them the ropes. The tour was a success in this department, and we have a lot of exciting talent to look forward to in the coming years!

This year will be incredibly special in the Club’s history as we attend the inaugural World University Rugby Cup, hosted by Oxford University in September. The competition will see top university teams from around the world going head-to-head to decide the World University Champion! The players who have been selected for this honour are extremely excited and proud to be representing our club, university and country. We are sending a full-strength squad, and are looking forward to making some great memories – and winning the Cup! In my address to the club at this year’s AGM, I made special mention of all the “recent” Ikey Tigers playing rugby abroad.

We are all aware of those representing the Stormers and Western Province, but we have a large contingent of players representing the Club all around the world. Don Armand had a very strong season on the flank for the Exeter Chiefs in the Premiership, while Nick Fenton-Wells continues to be a highly respected and loved player at the Bedford Blues. Chris Heiberg, Marcel Brache & Slak Van Wyk all played influential roles in the Western Forces Super Rugby campaign. Andrew Norten and Manuel Dominguez have both had decent seasons in the Spanish League, while Liam Slatem, Dayne Jans Matt Rosslee and Dylan Rodgers are all playing rugby in Hong Kong. Special mention to Liam Slatem who won the Hong Kong Player of the Year award! Ross Jones-Davies has played for Jersey RFC in the Championship and Richmond RFC. Varsity Cup Champion flyhalf, Dean Grant, has recently jetted off to kick rugby balls in France.

Next season will see Richard Stewart and Mike Botha playing for the same club in the Spanish League, Nicholas Holton will be joining up with other Ikeys to play in Hong Kong, while James Kilroe will be playing for Cambridge University. Demitri Catrakilis, who has been playing for the Stormers is off to join Montpellier in France after the World Cup.

It’s great to see how the Ikey Tiger network has spread! UCT RFC Director of Rugby, Kevin Musikanth, has lead a very successful management unit over his tenure at UCT, resulting in various coaches attracting the attention of professional outfits. Scrum doctor, Paul Day, is now the scrum coach for the Western Province Currie Cup team and Robin Arkell is the new Head of Strength & Conditioning for the Pumas Currie Cup squad.

Tom Dawson-Squibb is the consultant Performance Coach for the Sharks, while Hanyani Shimange is coaching the Western Province u21’s. Clint Van Rensberg was the head coach of the Western Province u18 Academy Week team who won their national competition. As players, we are very proud of all our management who have done so well, and it shows that there is a lot of respect amongst the rugby community for what we do at the Ikey Tigers. My time at the club has come to an end, but I will always be a proud Ikey Tiger. Over the past six years I have met many great people, made some special memories and won many rugby games!

One of the major lessons I have learnt from the club is the power of people. We don’t have the best facilities, nor a budget close to that of our competition, yet each year we are extremely competitive. The reason for this is the amazing and special people we have at our club, who give far more than they take. The Club’s guiding principle of “being better people who inspire” is something I will take forward into my life. Thank you to all the Ikeys, past and present, for making this Club what it is today.

May we continue to move from strength to strength! Once an Ikey, Always a Tiger!

Doc Moss – tribute to a rugby legend
Scroll to top