Blog - Latest News
You are here: Home / Newsflash / UCT ready for the Super A League 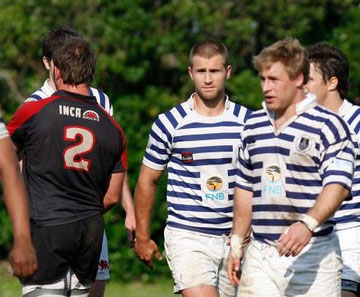 Behind the curtain of the Varsity Cup and a long way from the limelight, the UCT First XV has been training hard for what has to be the most competitive club rugby competition in the country. The Super A League is truly the grit that builds both players and club character alike and offers no easy games at all.

Away from the crowds and cameras we have become used to during the Varsity Cup, the UCT First XV as well as the rest of the UCT rugby club will do battle for log positions in months to come.

In light of a very successful Varsity Cup campaign that has yet to reach it’s grand finale, the UCT First XV will be looking to maintain the momentum that has been created up by their fellow IKEYS this year and continue to play the exciting brand of running rugby that has become synonymous with the blue and white stripes.

Bolstered by some new younger players as well as some of the Varsity Cup squad that have been released for this weekends encounter, the UCT first team will play SK Walmers on the Green Mile on Saturday afternoon in what is certain to be a game full of fireworks. “I’ve picked a group of players that are ready to go to war for each other and who bleed blue and white” said Ant Fenton-Wells who will be standing in for Kevin Foote as UCT First XV coach with the latter currently on Varsity Cup duty.

“This side is full of guys who are passionate about UCT and this club. A great mix of older guys who have played Super A League Rugby before and a few very exciting younger players” said the skipper, Andre Coetzer who will be leading the UCT First XV on Saturday. “We’re a bunch of mates who want to play our hearts out for one another, that’s the UCT way and we cannot wait for Saturdays game.”

As in previous games against SK Walmers, we can surely expect some great running rugby, some big defense and in short, an exciting 80 minutes of rugby.
You don’t want to miss this one!

A chat with the UCT 1st XV skipper