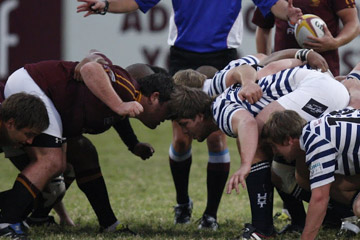 UCT coach Kevin Foote's selection options for the exciting match up with Maties in Stellenbosch on Saturday has been significantly boosted by the return of some key players.

The Ikeys, the defending Super League champions, will travel to Stellenbosch looking to end the first half of their title defence on a high, whilst the home side, the Maties, will be looking to end this first 'block' in first place on the log.

The last time Stellenbosch and UCT met was in the 2012 FNB Varsity Cup presented by Steinhoff International – back in March; with the Maties winning 45-5.

Whilst the Maties are missing the likes of Grant Hattingh (now with the Lions) and Dean Hammond (SA Under-20) from the Varsity Cup, returning stars like Morgan Newman, Johan Roets and Wilhelm van der Sluys will add plenty to their side.

UCT, meanwhile, are without SA Under-20 squad member Dillyn Leyds (a stand-out during the Varsity Cup), along with a host of injuries up front, but they have been boosted by the return of Tiger Bax (from injury) and Ricky Schroeder (from Vodacom Cup duty).

"It's been a very testing period for us, having missed up to fourteen players due to injury at one stage, but we're very happy to welcome back the likes of Tiger Bax, Rayn Smid and James Kilroe for this weekend's game."