Blog - Latest News
You are here: Home / Newsflash / UCT kick off round two against False Bay 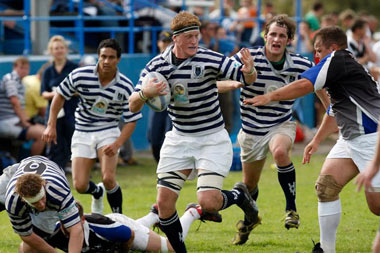 The FNB UCT rugby teams are returning from the long varsity vac and have been hard at work ahead of Saturday's fixture against The Bay at Philip Herbstein Sports Field in Constantia.

False Bay have had an unlucky season to date (going down 10:18 to UCT earlier in the season) and will look to bounce back against the Ikeys, but Kevin Foote is able to field a stong side for the short trip to the Southern Suburbs.

A few players return from injury, including Graham Knoop, who will parter Levi Odendaal in the second row, with WP lock Hilton Lobberts a late inclusion in the squad. Experienced 8th man JJ Gagiano heads up a powerful backrow that provides plenty of leadership up front, with former Ikeys U20 skipper Josh Katzen and Ikeys Varsity Cup skipper Ntsolo Setlaba on the flanks.

Flyhalf  Ross Jones-Davies who has been one of the most improved players in the club in his first senior season will again look to pull the strings for a powerful backline that pairs the direct approach of Andre Coetzer with the poise of Tiger Bax in the centers and has plenty of pace out wide with Mark Winter, Paul Cohen on the wings and Andrew Norton at fullback.

The Eagles team is also in good shape with Dayne Jans back from injury leading from the front at hooker and Sharief Hendricks forming an experienced half back combination with Mathew Russel. The Ish Dramat XV will again look to take points away from their Bay Counterparts.

Both the Marais (4th) and Moss XV (5th) are playing on Friday night.

The 1st team match will kick off at 3.30 to allow the teams and spectators to watch the much anticipated Super Rugby semi final, which kicks off at 5pm. For said Stormers Eben Etzebeth and Siya Kolisi are the young Ikeys in the starting XV, while Don Armand will be on the bench to provide cover.