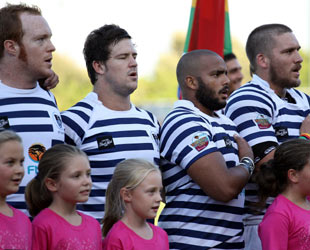 Reigning Varsity Cup champions, FNB UCT, have announced an experimental-looking squad for the 2011 USSA Week – a great opportunity for the next tier of players at the club.

Youngsters like James Kilroe, Jaime Manuel (the brother of Varsity Cup lock Pallo), Kyle Kriel, Robin Williams, Stephen Wallace and Awande Khumalo will all be looking to make an impact – especially with the all-new Varsity Cup Under-20 tournament on the horizon next year.

Ikey Tigers team manager Lisa Brown said  “This is a great opportunity for [coach] Footie to test the depth at the club and also for the Under-20 coach to have a look at some prospects for next year.

“Players like Nick and Wes will provide plenty experience, but we’ve called on some Under-20 players and also some second and third team players – all of whom deserve a chance to push their claims for first team honours.”

The Ikey ‘cubs’ will take on Varsity College (an amalgamation from KwaZulu-Natal – including players from the Sharks Academy) on Monday at 12pm. Their other fixtures – for Wednesday and Friday – will be confirmed as the tournament progresses.