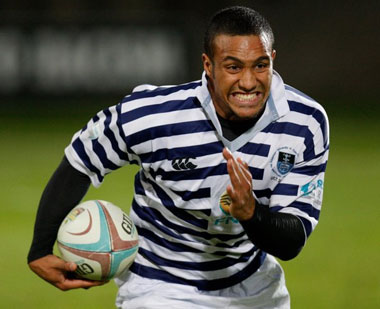 ‘Egg’ Abrahams, one of the scorers against NNK (photo Peter van As)
The Ikey Tigers beat NNK 39:15 on the weekend doing most of the damage in a convincing first half performance which saw them go ahead 32:3. It was a great afternoon for rugby – not only because of the looming Super14 semi finals – but because of the perfect conditions in the sunny Parow stadium.

UCT – again captained by Don Armand – started with a lot of go forward and Paul Cohen kicked the first three points at the first visit into the NNK 22. Next it was Nic Groom who darted around a ruck to score after the UCT forwards had driven a line-out just metres out.

The Ikeys forwards would get another chance to drive off a 5m linout and this time the pack’s efforts were rewarded when Yaya Hartzenberg dotted down. Flying Zubayr “Egg” Abrahams was next to finish against a defense that had been spread after a couple of well played phases.

The home side started to crumble now about 30 minutes in – Marcel Brache who was meant to set up a phase play in midfield cruised through a gap and offloaded to Nic Groom who scored under the posts. Paul Cohen added the extras.

Tiger Bax who had a good game at flyhalf found some space out wide after UCT recovered the restart and NNK’s defense was losing their spirit. He was away for a certain try but chose to play an entertaining pass to Jody Burch who was in support, so the big man got on the score sheet instead. The half time score was 32:3 and the game seemed over as a contest.

But as UCT rang wholesale changes, the home side decided not to go down without a fight and took the game to the students who were now a bit too relaxed with five tries on the scoreboard.

The NNK forwards drove well off lineouts and kept the ball tight, rumbling down field until they eventually barged over after multiple pick and go phases. The conversion was good from far out and the score was 32:10 with 35 minutes to go.

UCT’s scrum was now feeling a bit of heat with the team in red getting their tails up and a slipped tackle allowed their scrumhalf through a gap to score to make it 32:15.

The students were industrious and had some great breaks with Sharief Hendricks finding gaps and the team getting the ball through the hands in break away positions, but there were passes gowing awry or balls getting knocked on which prevented the interplay to result in any points. One quality phase of play had UCT work their way into NNK territory and it was big Andre Goosen who tanked himself over after some great driving runs by Andre Coetzer and Levi Odendaal.

The Ikeys man of the match was two try hero Nic Groom.

UCT now have a week off before they take on Durbel away on the 5th of June.