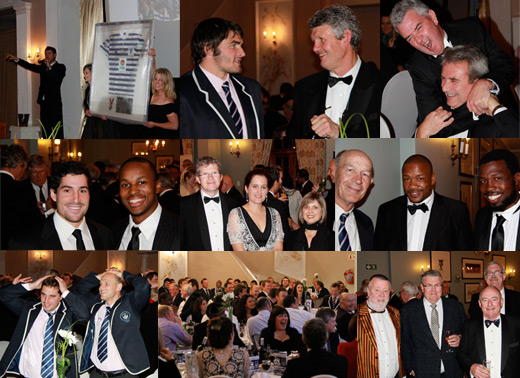 The 2011 Ikeys Black Tie Dinner was held last Friday at Kelvin Grove – an outstanding event in this extraordinary year for UCT rugby. It was attended by 200 uct old boys and friends of the club, who enjoyed Ikeys entertainment at its best while celebrating many reunions in a festive atmosphere.

The guests were also treated to a Varsity Cup video presentation – showing some of the best scenes and tries of the Ikeys 2011 tournament.

Tom introduced guest Speaker and 1995 World Cup Winning Springbok manager Morne du Plessis – an old Matie – in a hilarious way that the pleasant director of the Sport Science Institute will surely remeber.  Morne then enjoyed sharing some of his rugby experiences – many of which with the beloved Ikeys – and shared some great laughs in his speech.

Later it was time to kick off the auction, which was expertly handled by Tom Dawson Squibb. The magnificent items had the bidders go big in order to raise further funds for UCT Rugby bursaries and club development.  The prizes included
– a Springbok jersey signed by the RWC squad
– a stay at fomer Ikey Dennis Nick’s Mayfair appartment in London
– a BMW High Performance and driving course courtesy of SMG Cape Town
– and a signed and framed Ikey Tigers Varsity Cup winners jersey.

This item was particularly hotly contested – as it happened, by two fathers of members of the winning team – Matt Paige and Pete Haw.

It was the famous “Heads or Tails” game, brilliantly conducted by the notorious Dayne “Danger – you know I love a bit of an audience” Jans that had the guests in stitches. The prize which was battled out by the final heads or tails survivors in a classic Rock Paper Scissors fight to the death, was a dinner for four at Caveau Wine bar and Deli.

Thanks again to all the sponsors and contributors to the event – with your generopus support, the 2011 Black Tie Dinner has contributed in excess of R85 000 to UCT Rugby bursaries and club development. A big thank you also goes to all the guests who made the dinner so memorable.

A special thanks you to our sponsors FNB, Personal Trust, Steinhoff International, New Balance, Sports Science Institute and the companies that joined us with corporate tables; KPMG, Peninsula Beverages, IAM, Smollan Group and Burger and Wallace.

We look forward to welcoming as many of you as possible to the Ikey Foundation and of course also to many of the matches of the Ikeys of 2012.

click here to tell a friend about this article