In 1992 when the Club had its first Annual Black Tie dinner at the Ritz Hotel in Sea Point, Steve Tshwete was invited to be our guest speaker. He readily accepted.

Steve was delighted to meet two UCT Springboks (see photo below of him with H.O. de Villiers and Roy McCallum). As a rugby man, he shared with us his joy in watching H.O. de Villiers, as a school boy, enthral spectators playing for Dale College in King William’s Town in the early 60’s, so he was especially delighted to meet H.O. Steve mentioned that Ikey Old Boys Roy and Ian McCallum were always in their Springbok team selected on Robben Island. 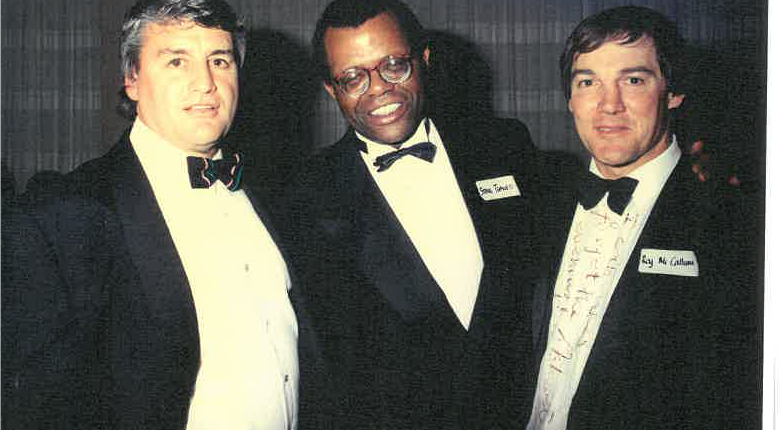 “I was exceptionally privileged to have had the pleasure of a number of very interesting discussions with Steve, who I got to know and recognise as a very unique man with a strong character and a wonderful sense of humour. Regrettably, there were far too few of these opportunities and I have, since his demise, sincerely regretted that there were in fact not more. I sincerely cherish the fact that he not only chatted freely and spontaneously with me, but that he was also prepared to share certain personal memories with me.

H.O. de Villiers went on to explain that “we chatted about matters, in no specific order and randomly”, such as:

His schooling and mine were both in King Williams Town (at different schools). Steve was at the local ‘black school’, whilst I was at Dale College. He was older than me and we did not know each other. Years later, at probably one of our first meetings, he told me how he watched me playing for Dale and how he would love to have been able to attend Dale College, which in those times was not permitted.

His parents were totally unaware of his political ‘activities and interests’ already as a school boy. He related how he, with rugby boots tied together by the long laces and draped hanging around his neck, a small kitbag packed with personal minor items, he would tell his parents that he was going on a school rugby tour. He would then disappear out of the country to some unknown destination for ‘terrorist’ training. 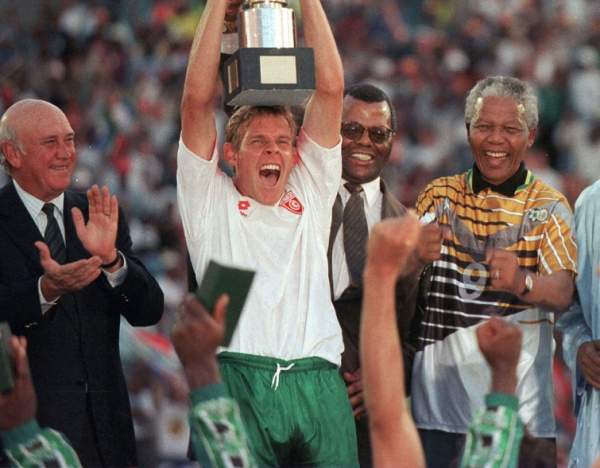 As we all know, in 1994 Steve was appointed the Minister of Sport and shortly thereafter South Africa was scheduled to host the 1995 Rugby World Cup. At the time, there was much speculation as to whether or not South Africa, with its new government, could/would rise to the occasion of being able to successfully host this event. It was whilst this speculation dominated almost every discussion in SA, that I bumped into Steve at Newlands and during our ensuing chat, I asked him the question: ‘will South Africa be able to successfully host the pending Rugby World Cup Tournament?’ To which he immediately replied: “Yes! But only if Louis Luyt is put in charge!”

When Steve’s father passed away in King Williams Town, at the family home in the local township area, I phoned Steve at his father’s home. One of Steve’s bodyguards/aides answered the phone and when I asked to speak with Steve, the aide explained that Steve was not taking calls unless it was important. I said that it was important, so the aide then asked for my name, which I obviously gave him. The next voice I heard was Steve’s and in his gruff voice, he simply said: “hello H.O. I knew that you would phone me!”

The day his son was accepted (some while later) as a pupil at Dale College, a very proud and very emotional Steve immediately phoned to inform me. It was indeed a great pleasure and a privilege to share in his joy.

To end, possibly on a lighter note, I always believed that my friend Steve loved the ladies and as such, I took the liberty of questioning him on this aspect during one of our more light-hearted chats. He looked at me through those thick-lensed spectacles that he was famous for, he smiled, chuckled and simply said: “H.O. as you know I wasted so much time on the island just off Cape Town, now it is time for me to make up for lost time!”

SA politician and activist with ANC, imprisoned on Robben Island from Feb 1964 – 1983 and later lived in exile. On his return in 1990, he resumed activities with the ANC and became regional coordinator for the new United Democratic Front. As head of the ANC’s Sports Desk he had the task of uniting sports that had been riven by apartheid. He had the knack of bringing sworn enemies to the negotiating table and sending them away as allies. Having united SA’s cricket bodies, he travelled with Ali Bacher to London in May 1991 and successfully applied for SA’s admission to the International Cricket Council. Steve was instrumental in de-racializing the national teams as Minister of Sport and Recreation. He served in Thabo Mbeki’s first government as the Minister of Safety and Security from 1999 until his death in April 2002.

John Le Roux, Chair of the Ikey Tigers Supporters Club, has called for support to set in motion a campaign to have the UCT Sports Centre re-named The Steve Tshwete Centre in honour of the man’s contribution to South African sport, 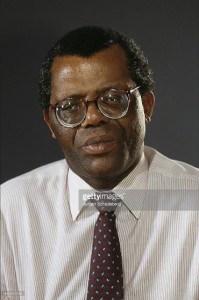