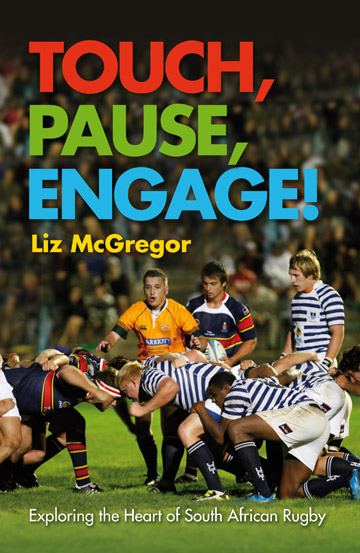 Liz has spent the past three years shadowing Currie Cup, Super 14 and Springbok teams and also extensively followed the UCT Ikey Tigers in 2010,  She has come to the conclusion that it is this very diversity, combined with the pain of the past and the dreams of a great united future, that provide the elusive alchemy that separates a good team from a great one.

Touch, Pause, Engage! is more than a book about rugby. It is an intimate look at how South Africa’s erstwhile elite is adapting to its new circumstances. Team South Africa has been through many a maul and bruising scrum, but is inching closer and closer to the tryline.

From a UCT perspective ‘Touch, Pause, Engage!’ not only famously features the cover with the famous Tiger striped jerseys.  It also holds some wonderful and sensitive insights into varsity rugby culture and camaraderie and vividly describes what makes student rugby and Ikeys rugby in particular such a special brand.

Former UCT coach John Dobson says:
“This, to my mind, is the outstanding book I have read on South African rugby in a long while in that it goes far beyond the norm, the mundane and goes to the very heart of the game. It is a different and refreshing realm to the standard histories and biographies and I know, from direct experience, that Liz has left no stone unturned in getting into the very heart of teams and the game in South Africa. It is one of our great sporting books.”

From the Pretoria heartland to the aspirant Eastern Cape, from the hardscrabble Cape Flats to the islands of privilege at Bishops and Grey College. No other rugby-playing nation has to grapple with so much diversity. Different languages, classes, races and cultures – each bearing the wounds of the country’s fractured past – have to be melded into winning teams.