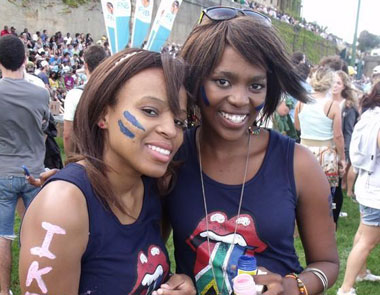 Asanga Mehana (right) in action for the TIGHT5
We are half way into the Varsity Cup and the Ikey Tigers are going strong. This year we would like to introduce you to the newest addition to the IKEY’s supporters, the Ikey Tigers TIGHT5. This group of extraordinary ladies are the ultimate and extreme Ikey Tigers supporters and are doing amazing work painting the Green Mile Blue and White and spreading the vibe.

We’ll start of with Asanga Mehana who is a legend when it comes to backing the Ikey Tigers, but also plays Netball for UCT 1sts as well as Waterpolo, so she knows the goosebumps of a proper Intervarsity.

First of all welcome to the TIGHT5!
We are  sure all the IKEY’s fans out there would like to get to know you a bit better so help us out:

Where are you from: East London aka SlumTown 🙂

Whats playing on your ipod?: If I owned one… it would be Alicia Key’s latest album.

Current Facebook status:
On Monday it was: “BACK UR BOOItjies today@ 4:30 on The Green Mile (Main rugby field). Remember ur blue, white n pink stripes! IKEYS need U!”

What are you studying: A BSc in Geomatics and Environmental Sciences

Youth or experience: hahahaha! Both!

Favourite quote: ” Success is a journey not a destination.” I always link this with Winston Churchill’s,  ” Success is going from failure to failure without losing enthusiasm.”

What will be your facebook status on the day of the Maties vs Ikey Tigers game:
Invite me on facebook and you might get to read it!

What was the best ever Ikey Tigers game you watched?:
Ikeys vs Maties, Varsity cup 2008 @ stellies! We didnt win the game but the support shown by IKEY fans gave me goosebumps!

Any other sports teams you support or are part of?:
I play for the UCT 1st netball side and UCT waterpolo which includes JABOOLIE league games@Kopano (which used to be a jol until CPS limited our drinking grounds).

I support the open rugby side and I watch the internal league games on Wednesdays as well (Go Ubumbo!). The atmosphere is usually fantastic. I’m also a keen Sharks and Habana 🙂 supporter!

Before a rugby game on the Green Mile…:
…I paint my face in blue stripes! hahaha but even before that i try really hard to psyche my friends up who arent always that keen on rugby however they always end up having fun when they do come… Eye candy does wonders for a girl.

Forward or Backline Players?
I would say both (track record?). Flyhalfs and centres always catch my eye…they always seem like they’re running the show but wings with sexy and fast legs are a 10/10!

Which game are you looking forward to most and why?:
Maties Vs IKEYS! This rivalry brews from netball and waterpolo too. To win VS a varsity which eats, drinks and sleeps sport is FANTASTIC. We (UCT students) are all at varsity to get degrees, playing sport is for the laughs. Playing good sport on the other hand makes us LEGENDARY!

Favourite Ikeys moment so far:
I’m still to have my IKEY moment.. 2010 is the year

Dobson on the Ikeys’ ‘shoddy’ performance

Gotta love being an IKEY!
Scroll to top