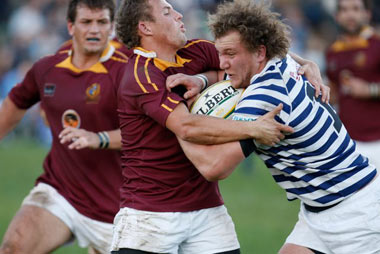 There was a distinct feeling of groundhog day, when Ikeys faced arch rivals Maties on Saturday. The Cape Town students found themselves 24:0 down at half time playing against the wind and their almost traditional fightback in the second half was again not enough to claim the coveted trophy when UCT went down 14:29.

Everything was in place, the conditions – with perfect weather after a rainy and cold week, the right names on the team list – with a number of high calibre players to bolster the sie and an excellent turn-out in the stands, but the Ikey Tigers leaked early tries and rued their costly defensive mistakes which turned the game into a massive uphill battle.

UCT started well enough moving the ball through the phases off the kick off and working their way into Maties territory. But soon after Maties with the wind in thejr backs, kicking down field got a lineout in the UCT dangezone and a missed tackle in midfield allowed their centre to score next to the posts.

The second try  also came off a lineout, this time it was driven over in the corner, 0:12. The Ikeys were doing a lot of the playing, sending the ball wide, but knock ons and mistakes cost them posession which Maties then used to kick for territory.

The times that the Tigers worked themselves into the Maties 22, they were not patient enough hanging onto the ball and forcing errors or an overlap and instead got turned over an booted back. UCT’s centre Mark Esterhuisen was yellow carded for a late tackle by the nervous ref, which didn’t help the home team’s defense. The men from Stellenbosch scored twice more in the first half and their 0:24 lead at halftime was indeed commanding.

The wind allowed the home side to have the territorial advantages the Maties had had previously and soon after the restart it was hard working lock Don Armand who blocked a kick of the Maties flyhalf and was then at hand to touch down the ball for a five pointer which Matt Rosslee converted.

The Ikeys were ready for another famous fightback and  ran hard at the visitors, with the electric Pete Haw and strongmen Yaya Hartzenberg and Nick Koster having been introduced off the bench. Mistakes and penalties however allowed for the Maties only visit in the UCT 22 of the second half. When loosehead prop Dylan Rogers inquired why he had been penalised, as to not make the mistake again – having been on the park for less than five minutes – he was yellow cared by the increasingly erratic ref who apparently thought he had been sworn at.

UCT being a heavy weight down, the Maties lineout was driven from 15m out and went over in the corner, 7:29.

The ikeys now went all out attack and camped in the maroon 22, with Nick Koster showing why he is such a talent – moving forward with high intensity and pace. The Maties were penalised repeatedly killing the ball and being offside, but UCT kept running and playing quick taps and found a gap eventually to score 14:29 with about eight minutes to go.

The Ikeys were soon back in the Maties 22, but the same thing happened again, the ball being slowed down illegaly, but the Maties and UCT knew that penalties would never be enough to make up for the score balance.

UCT’s man of the match was Nick Koster who made a massive impact off the bench.

In the end UCT were the once who tried but failed. With their flat start, it was too much too early by the Maties – and too little too late by the Ikeys, so the Blue and White faithful moved on into the beer tent to watch the Stormers do much the same as their own team. At least the bar specials helped lift everyones spirits and a great party was had despite the disappointing rugby.

UCT’s second team continued their unbeaten run with a hard fought 10:8 and the Ish Dramat XV also had an excellent game, beating their opposition 27:26 (read the match report here) – well done to both teams for flying the blue and white flag!

The other tophy match fo the day was the U20 A1’s match for the Henley Atkins trophy which UCT lead until the last minute, when Maties came back to draw 17:17 and share the spoils.

The Club now play Durbell on Wednesday night – apart from the 1st team and then SK Walmers on Friday night.