You are here: Home / History / The UCT Nighthawks are ready to rock at Varsity Sports 7s 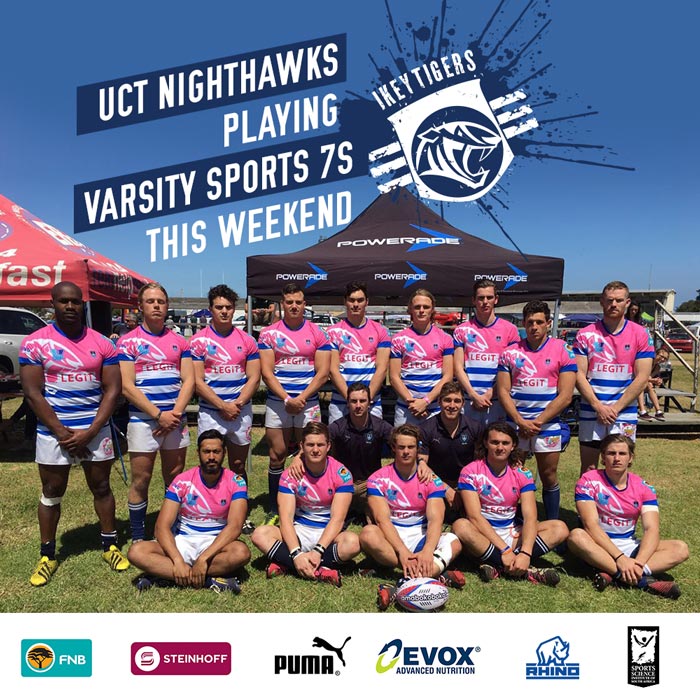 The Varsity Sports 7s is less than 24hrs away and the UCT Nighthawks will be eyeing the top prize when they compete in this year’s edition of the tournament held at Kings Park Stadium in Durban from the 1st to the 3rd of December.

The Nighthawks will be looking for an even better team performance after they finished as winners of the Bowl final beating the Madibaz in last year’s competition.

Upon arrival the team made their way to inspect the facilities and coach Mike Muller (Foley) was pleased with what he saw, “we went to have a look at the field and Varsity Sports has really put on an amazing set up, the field looks great and the warm up area looks really good.”

Preparations went well in the build up to the tournament despite a few disruptions which have created a minor setback to the team’s progress.

“We’ve trained hard for it so we’re feeling good about it. We had a couple of players pulling out last minute due to injuries and player eligibility. Luke Leach suffered a knee injury last week Friday so he couldn’t join us but has been replaced by Liam Furniss. It’s a little bit disruptive from an injury point of view and guys joining us late because of exams but we’re happy with preparations and gents are certainly excited for the weekend ahead,” said Foley.

The side, co-captained but Suwi Chibale and Jesse Wilensky, will kickoff their campaign with a Cape Derby when they take on last year’s Cup runner’s up UWC this Friday at 10.06am.

There are some exciting prospects in this Nighthawks side who will be looking to spark some magic and follow in the footsteps of the likes of, former Ikeys and now Blitz Bokke, Dylan Sage and Kyle Brown during this weekend of exciting rugby.

Catch all the live action on Super Sport as the future sevens stars compete in Durban at the Varsity Sports 7s proudly brought to you by First National Bank, Steers and Samsung.