Blog - Latest News
You are here: Home / Newsflash / The ‘other’ John Dobson 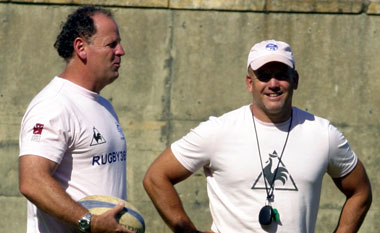 At first glance, former Ikeys coach John Dobson is your average professional rugby coach – dedicated and passionate with the badges of playing the game evident in scars on his legs and face – yet he is anything but average. Read the insight report by sportlive.co.za

Describing Dobson as only a "coach" is like saying rugby is just a game. Both are as wide of the mark as a Gaffie du Toit kick on a windy day in Dunedin.
In addition to being a coach, Dobson is a successful businessman, having built-up the sports website www.rugby365.com into one of the world's leading rugby portals.
He also holds a law degree and an MBA and has just completed an MA in creative writing at UCT. To boot, he's published a book – not a biography – but a work of fiction that has received warm critical acclaim. All this while working as a rugby coach.
Dobson first caught the eye as UCT coach in the Varsity Cup, twice steering them to the play-offs before embarking on an adventure as coach of Roma.
In 2011, he took charge as Western Province's Vodacom Cup and under-21 coach, where he has come under the influence of Rassie Erasmus and Allister Coetzee, coaches he admires.
Since taking the reins of the second team at Newlands, the results have been superb. In his first year, WP went through the group phase of the Vodacom Cup undefeated, only to lose in the quarterfinals.
This year, they again advanced to the playoffs without a blemish and then consolidated their performances by winning the Vodacom Cup for the first time in the union's history. In two seasons on his watch, they have only lost once in 18 matches.
In Cape Town, success is not usually measured in Vodacom Cup triumphs, but given that fans had endured over a decade of trophyless campaigns, the modest success has been met with loud trumpeting.
Dobson understands at Newlands that the Vodacom Cup side is just a feeder to the Stormers. So perhaps his greatest achievement has not been in winning the Vodacom Cup, but in ensuring players such as Siya Kolisi, Nizaam Carr, Eben Etzebeth and Skarra Ntubeni have all looked comfortable in Super Rugby. It's no wonder he was offered a new three-year contract by WP last week.
And all his rugby success been achieved while writing The Year of the Gherkin, a funny and sharp analysis of SA's culture of consumerism and shallowness through the eyes of an average twenty-something, white hero named Jason Brydon.
"Through Jason I wanted to have a go at white South Africans who don't engage with the country in any way," Dobson says. "In the book, one of Jason's mates is a liberal who attends a political rally in Langa instead of a braai with his mates. A friend says to him he would be the 'only rice crispy among the coco pops'. I stole that line from a personal experience."
This is not Dobson's first foray into fiction. As a schoolboy at Bishops in the 1980s, at the height of apartheid, he wrote a story called "Tutu much" about Archbishop Desmond Tutu staying with a white family while his house was being renovated.
It was also a commentary on events at the time and a sly dig at his school. "In those days, the Archbishop of Cape Town was always automatically chosen as the chairman of the school council, but when Tutu became Archbishop, the school changed its constitution," Dobson says.
After leaving school, Dobson realised that the South Africa he was living was not a normal society so decided to broaden his horizons. A decent hooker, he played in the old Currie Cup B section for WP Federation with Avril Williams, Tinus Linee, Jerome Paarwater and Archie Johnson (Ashley's father).
He later floated between SA, Portugal and Italy playing the game, but more importantly acquiring life skills and broad experience. A neck injury ended his serious playing career.
Courtesy of http://www.sportlive.co.za/rugby/morerugby/article5217840.ece
https://ikeytigers.com/wp-content/uploads/2012/06/01012009-white_jake_uct380.jpg 233 380 Ikey Tigers https://ikeytigers.com/wp-content/uploads/2016/06/uct-ikey-tigers-logo-web-blue.png Ikey Tigers2012-06-06 11:58:582012-06-06 11:58:58The 'other' John Dobson
0 replies

Etzebeth is the Ikeys latest Springbok