His enthusiasm for both the game, and the team is contagious, and his humble attitude is just one of many characteristics which make him a great role model for his fellow team mates in the season to come.

UCTRFC.co.za took the time to catch up with him ahead of the Tigers first game next week, to gain some insight into his appointment and his feelings about the 2014 Varsity Cup.

uctrfc.co.za You've already had some experience as captain; in what way did the announcement feel different this time?

LS: Well, like last year I feel honoured to lead the side again this year. With a new coach on board I wasn't sure if I'd get the opportunity this year but I have and as I said it is an honour to lead such a great group of players.

uctrfc.co.za What does it mean to you to be coaching such an exciting side this season? 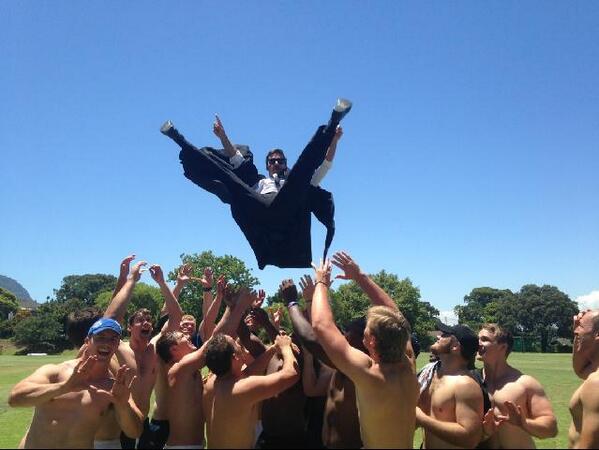 Liam Slatem in his graduates outfit gets a cheer from his team mates.

uctrfc.co.za What do you look to inspire in your players/team mates?

uctrfc.co.za What are your views on the recent innovations, the Free Catch rule and the introduction of 2 referees?

LS: The 2 ref system is great, I think it will allow for running rugby and decrease the negative play at ruck time. It will allow for a more fluent game as the 2 refs will have more control of the game. The free catch rule will definitely be useful and allow teams to punish poor kicks. We have worked on the free catch rule and believe it will be advantageous for us in the campaign. The 2 laws have been implemented to promote running rugby and I think that will definitely be the case.

uctrfc.co.za How are you and the team feeling about the season coming up?

LS: We are positive about the up and coming season. We have a great group of players, with some new faces in the squad. We have a good mix of youth and experience and have a number of players who can change a game in the blink of an eye. We are looking forward to the campaign and can't wait to get on the Green Mile.

uctrfc.co.za What is the dynamic between studying and being a part of Ikey Tigers team?

LS: Obviously it’s not easy studying while playing rugby, but I am looking forward to getting back to varsity and starting the course.