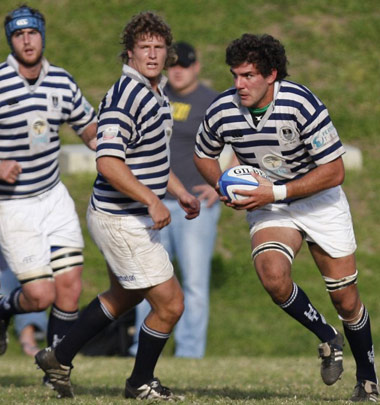 Going places: Kimberly bound Passa and Dguy supporting JJ Gagiano who is currently playing in Rome.
Experienced UCT Ikey Tigers prop Dylan ‘Dguy’ Rogers has confirmed his move to the Griquas for the 2010 Vodacom Cup. Dylan who has been an important member of the UCT 1st team for a number of seasons can play loosehead as well as tighthead prop, which makes him valuable to any squad. (Photo Peter van As)

Rogers’ chance is well deserved, after very solid showings in the Varsity Cup as well as the league season. Dylan is and has been an exceptional Club man at UCT, having been an active member of the student committee, so it came as no surprise when he was elected as Club Captain for 2010 at our recent AGM.

He was the main driving force behind the sensational 2009 End of Season Dinner and had big plans for the club in the coming year. While he was looking forward to another season at varsity, he says: “The opportunity to join Griquas was unforeseen and it is too good for me to pass.” Dguy is over 25, so can’t play Varsity Cup any longer, so the move makes a lot of sense. Griquas of course have won the 2009 Vodacom cup and were the surprise packlage of the Currie Cup.

Dguy will be joined by fellow Ikeys forward Mike Passaportis who also got a contract offered by the Kimberly based outfit.

The UCT Rugby Club will hold a special AGM to elect another Club Captain, in the meantime 2009 Club Captain  Xhanti Nesi and Don Armand have volunteered to stand in and pick up Dylans duties until then.

GO Wilko!!! We always new you had it inVarsity Cup stars honoured by WP
Scroll to top