Blog - Latest News
You are here: Home / Newsflash / ‘Play the game, not the wind’ Commins 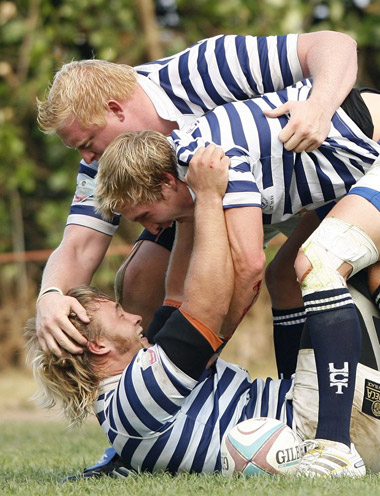 Veteran Ikeys Varsity Cup scrumhalf Stu Commins (pictured celebrating Danger’s try vs Pukke) believes that UCT are well-suited to cope with the windy conditions in Port Elizabeth, as they prepare to travel to the ‘Windy City’ to take on NMMU this Monday (kick-off 6.30pm) (Photo Carl Fourie).

The Ikeys, of course, play their home matches at the notorious Green Mile (at Groote Schuur, in Cape Town) and – if anybody should – they should be used to the windy conditions expected in PE.

“We’ve all spent many a night, in gale force winds, at the Green Mile,” chuckled Commins “(so) yes, if any side should, and can, cope with the wind it should be us!”

Commins, however, believes too much fuss gets made of the wind, adding: “If you can use it to your advantage, then it’s fine.

“They key is to keep it tight when you’re playing into it and then to use it to keep the opposition pinned back when you have it behind you.

“Look, it’s not easy – especially if you’re playing against the wind first and you fall behind quickly – but you need to keep your wits about you and rather use the wind to your advantage.”

Stu is something of a Varsity Cup stalwart for UCT, having played in the 2008 and 2009 competitions and is currently his team’s vice-captain.

It does, however, give the Ikeys boss more options when it comes to the make-up of his team, Commins having skippered the side in the final quarter against Pukke on Monday when Fenton-Wells was forced to leave the field with a slight niggle.

As it turns out, Commins will also captain the team on Monday against NMMU – as Fenton-Wells enjoys a well-deserved rest – and he commented: “It’s always an honour to lead a great team like UCT, but it wasn’t a hard job at all – everyone’s attitude out there was awesome and I certainly didn’t have to ask anybody out there to put their bodies on the line!

“All I needed to watch was our discipline, which I guess needs some work, but it’s something we did have a look at during the week.”