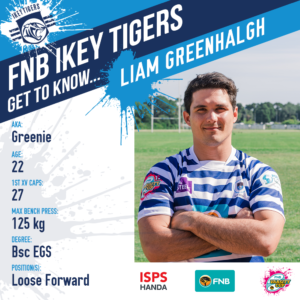 Liam Greenhalgh, “the gh is pronounced as a J” is the captain of the Ikey Tiger’s First Team. A role no one should look over too quickly, but Greenhalgh proves that humility still exists in our so-called narcissistic generation.

The Rondebosch Old Boy quite literally proves on a daily basis that balance is possible. Greenhalgh has recently completed his undergraduate degree in Environmental Science and Oceanography (EGS) and is currently working towards his Honours in Financial Analysis and Portfolio Management.

Aside from his clear academic capabilities, Greenhalgh loves to sing explaining that “I’m a shower singer, I just back myself”, he also loves his music and has played guitar since Grade 3.

Anybody for a post-match serenade?

You can also find Greenhalgh in the water enjoying all the water sports or anything “outdoorsy”. But, he also ensures us that he has his downtime, and has just completed the 10thseason of Friends for the 4thtime – anyone for Netflix and Chill?

UCT prides itself on the fact that all our players are academic students whom place a lot of importance on their academic achievement and Greenhalgh is no different.

He explains that “the first year was a big struggle to adapt from school, but once you find a way it becomes second nature and it is quite easy… especially because you’re surrounded by thirty guys who are all going through the same thing.”

“The older guys give you tips along the way, so you never really feel alone,” he elaborated.

Greenhalgh made his 1stteam debut as an U20 which was “quite an honour”, while it was only 10 minutes, Greenhalgh clearly made some type of impact as he would later become the captain of that very team.

He reminisces and explains that all the guys were really supportive and that systematic hierarchy from the older guys has never been an issue at UCT, a trait that makes “UCT Rugby quite unique.”

An average game day involves a big breakfast, a team power session in the gym, a swimming session, team talks and a nap before the game.

This Ikey Tiger has big and attainable dreams, he hopes to play for Spain one day, “that’s if my body holds out, I’m feeling old” (I guess we are all feeling old these days too).

Just don’t forget us when you are rich and famous Greenie, the Ikeys back you all the way and good luck for the Varsity Cup season!

Catch the first team on the Green Mile on the following dates: