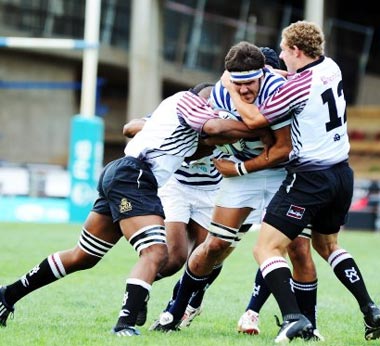 We caught up with Levi Odendaal the hard man lock who has joined the Ikeys this season and is quickly making a name for himself as work horse forward and all round great guy! He has only been in the Soutie side of the Cape for three months, so forgive him if every third word is Afrikaans – we promise to do another interview after ten months and will re-check his average.

uctrfc.co.za: Howsit Levi, how’s Cape Town today? You haven’t been down here for that long, have you?
LO: All is well, I am loving Cape Town, I was in the Big Smoke for the past 3 years and only moved here beginning of the Year. Best move I ever made!

uctrfc.co.za: We could havw told you that three years ago man! What are the going nicknames the guys have come up with for you? Or shall we stick with Levi?

LO: Ja Levi is cool and Soutie, but Footey (Assistant Coach Kevin Foote) started this new “lawnmower” thing. There is quite a long story behind it, but I don’t want to give away any secrets now.

uctrfc.co.za: You shouldn’t have told us that one. How did you end up on the Green Mile, tell us a bit about your rugby background.

LO: I’m from the Eastern Cape went to Marlow Agricultural high school in Cradock, yes i am an “Afrikaans Boerseun” – believe it! I played Craven Week for Eastern Province and then after school I got a contract for 3 years at the Golden Lions. How did I end up on the Green Mile? The main reason really was that I wanted to play winning rugby and live in Cape Town.

uctrfc.co.za: Way to go! How are you enjoying the Ikeys so far?

LO: Jeez its such a vibe, I’m loving it. New culture for me coming from an Afrikaans background of course.

uctrfc.co.za: We’ll forgive you. How have you enjoyed the games so far? What do you thik of the level? Which of the games stands out – including the warm up matches?

LO :The Stormers game was epic. I enjoyed that but all of the games have been great i really think we’re gonna lift the Varsity Cup trophy on the 29th!

uctrfc.co.za: That’s the spirit! Do you have any personal goals for the Varsity Cup?

LO: Just to play better every game and have a big work rate, and help the team win the cup of course.

uctrfc.co.za: Finally, we don’t just play rugga at UCT,  what / where are you studying?

LO : Spot on! I’m studying quantity surveying through Unisa
uctrfc.co.za: Thanks! See you soon on the Green Mile and good luck for Monday!
LO : Cheers

Off The Mark –Episode 5- Ikeys in Joburg China!2000 tickets on sale for UCT fans
Scroll to top