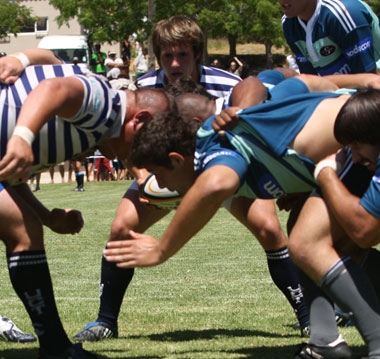 Nic Groom feeding the scrum against Stormers
We tracked down yet another Ikey newby in young scrumhalf Nic Groom who made his Varsity Cup debut off the bench on Monday against Shimlas in the PE wind battle.

uctrfc.co.za: Hi Nic, thanks for taking the time. We heard there are a number of nicknames making the rounds, can you quickly set the record straight on the ‘official’ ones, before we get cracking?
NG:  No worries (laughs) I think the most popular ones going around are ”Harro” and ”Groomadge”, not sure how they ended up like that but i dont mind either hey although i think most of the guys go with Groomadge.

uctrfc.co.za: Good work – Groomadge. You played for the other blue and white stripes – the WP version – last season, give us a bit of background on how you ended up in the Tiger lair.

NG: I remember a couple of years back in matric watching the UCT 2008 VC campaign and just been absolutely in awe of the vibe and the way UCT played. The passion and spirit for the game is one of the main reasons i play the game so since then i have always wanted to be part of the club. It all just fell in to place after that i guess, ended up speaking to Dobbo last year and now Im here, a very happy guy .

uctrfc.co.za: How are you enjoying the Ikeys so far?

NG: I am very happy to be an Ikey. Its such an amazing environment to be in. The journey we have all travelled so far has already been so special and its only just starting. To be involved with such quality players and coaching staff who are all quality people as well is really awesome.

uctrfc.co.za: You got a run against the Stormers and more recently against Boland, how does it compare to the age group rugby you played last so far?

NG:The game obviously is much more physical and technical i think. At age group you can get away with certain things, but at this level if you make a mistake, chances are that they will get points every time.

uctrfc.co.za: Do you have any personal goals for the Varsity Cup?

NG: My personal goal for a while is to make the match 22, forunately that has now happened, so from now its my goal to contribute towards bringing that trophy home which is my goal right at the top of the list.

uctrfc.co.za: Well done for making the team! Finally, we don’t just play rugga at UCT,  what / where are you studying?

NG: Im studying a General BA, majoring in psychologoy and media and writing, hoping to go into Law in my second year,but ya we will see how it goes .

uctrfc.co.za: See you soon on the Green Mile!

Maties, Pukke set the mark Off the Mark – A draw, where’s my sister? Part1
Scroll to top