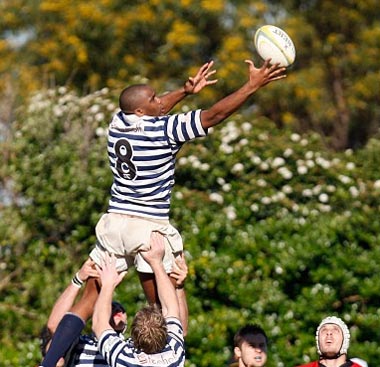 Sam Peter pictured winning line-out ball, gets another start for the Tigers
Stormer Tim Whitehead and promising Ikeys backline talent Marcel Brache have been reunited at centre for FNB UCT ahead of Monday’s meeting with the TUT Vikings in Cape Town (kick-off 4.30pm).

Whitehead has been switched from outside centre to inside centre, whilst Brache- who started on the wing against NMMU this past Monday – will wear the No.13 jersey. (These two started at centre in UCT’s opening game against Shimlas on February 1.)

Barn-storming midfielder Sean van Tonder will start on the bench and will no doubt get a second-half cameo when the Vikings defence starts to tire a bit – a situation which suits the 98-kilogram Ikeys back.

UCT regular Marcello Sampson returns from injury to take over the No.11 jersey from Brache, whilst 19-year-old flyer Paul Cohen – who came off the bench last week – will take over from Varsity Cup veteran Pete Haw on the other wing.

Scrumhalf Stu Commins will again lead the Ikeys into battle, as squad captain Nick Fenton-Wells gets another week off to rest a slight niggle, with Yaya Hartzenberg packing down at No.6 in Fenton-Wells’s absence.

Hartzenberg – who will turn out in the pink shorts on Monday, having scored four tries against NMMU in UCT’s 65-9 win – will once again team up with American international JJ Gagiano (No.7) and new boy Sam Peter (No.8) in the Tigers’ well-balanced back row.

Elsewhere in the UCT pack, head coach John Dobson has recalled lock Levi Odendaal and tighthead prop Grant Kemp, the duo having been rested from the PE encounter.

Mark Goosen gets a second successive start in the No.2 shirt, with Dayne Jans keeping him on his toes on the bench, whilst prop Shane Meier and scrumhalf JP Robert – both of whom featured for the Ikeys last season – return from injury to win bench spots for the first time in 2010.

u20 A2’s squad announced Off the mark – Episode 4 – The Ikeys prepare for valentines day...
Scroll to top