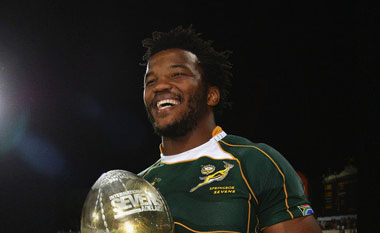 Former Ikeys flank and SA Sevens captain Mpho Mbiyozo has been selected to start for the SA Barbarians South in their match against England on Wednesday in Kimberley.

"I am busy organising a pair of UCT socks to wear for the match – in true BaaBaas tradition" said Mbiyozo who kicked off his impressive career with a match winning try in the 2004 Intervarsity win against Maties. The EP kings star  is due to be a father this month and suitably excited.

The other former Ikey in the mix is big tighthead prop Ross Geldenhuis who has moved to Boland after a stint with the Lions in Super Rugby and Stade Français in the Top 14.

The team includes a total of eight players from Boland, who won the Currie Cup First Division title last year, and a seven from beaten finalists the Kings. In addition there are three each from SWD and Border and one from the Pumas.

As expected it's all change for England's mid week side, following the defeat to the Boks. Matt Mullan and Paul Doran Jones will pack down either side of Joe Gray in the front row with skipper George Robson and Graham Kitchener packing down behind. James Haskell, Carl Fearns and James Haskell make up the back-row. Charlie Hodgson and Danny Care will pull the strings, Anthony Allen and Jordan Turner-Hall feature in midfield with a back three of Alex Goode, David Strettle and Christian Wade providing the firepower.

Both sides are packed with pace so if the game opens up then expect both sets of wingers to get plenty of ball.