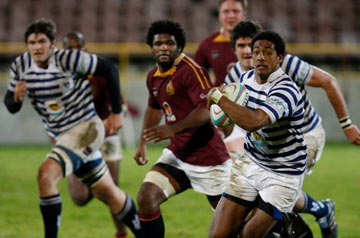 Wednesday night’s game was a typical Ikeys vs Maties affair – typical in the way the game was played, typical in that Maties started strong, UCT fighting back and coming close to winning and typical in that Maties took it in the end. UCT down 19:18 with minutes to go missed the conversion to take the lead and where then surprised by a last second Maties blitz of two tries to go down 31:18.

As per ususal Maties started strongly and had a healthy lead at the break. In the second half UCT were scintillating and showed yet another brilliant fight back, which took them to 19:18 with the conversion ready to claim the lead with 4 minutes to go.  But the Ikeys points machine Paul Cohen missed and Maties struck back to score two tries in last minutes to seal a great game.

Ikey coach Kevin Foote said: “There were some  great moments in the game and I thought we played very well in the second half. We had them, but we missed the kick to take the lead, then we lost the kick off and they get into our 22 and scored.”

All in all, plenty of excellent rugby by both teams and not much between the two sides as so often. The final score, courtesy of some last gasp points, certainly flatters the hosts.

Match gallery by Peter van As:

UCT3 in scrappy win vs. NNK NO MISTAKES POLICY IN QUARTER FINALS CLASH
Scroll to top