Blog - Latest News
You are here: Home / Newsflash / Maties do it again 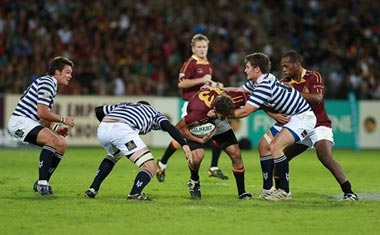 Maties won their third consecutive crown in the FNB Varsity Cup, building on two early tries and surviving a late Ikey Tigers onslaught to win 17-14 in front of 20 000 people in Stellenbosch on Monday evening.

Outscoring their Cape Town rivals, UCT, by three tries to one, Maties established themselves as the true university champions of South Africa – adding to the 2008 and 2009 titles.

The atmosphere at The Danie Craven Stadium was positively buzzing. Small pockets of visiting fans tried their best to make the UCT presence felt, but were drowned out by the swarms of Maties fanatics.

On the field, it was a nervy start from both sides and the players, who looked a bit daunted by playing in the high-pressure cauldron of a Final, looked to put boot to ball early on.

It was the visitors who showed the first signs of attacking intent and they put some good phases together. Flyhalf Doug Mallett distributed well to dangerous men outside him.

It was Mallett who got UCT off the mark in the third-minute with a well-struck penalty after a Maties infringement at the breakdown.

That lead though, was short-lived, as Maties regained the ball and attacked wide for the first time in the match.

The UCT defence was stretched, and a chip kick put right wing Pete Haw under enormous pressure on his own goal-line.

The pacey No.14 did well get himself into a position to kick, but his clearance wasn’t as impressive and was expertly fielded by Maties scrumhalf Johan Herbst.

Herbst moved the ball infield as a the Maties moved dangerously into attacking formation. The ball found its way to try-scoring machine Tythan Adams via some superb handling from Kemp and fullback Adnaan Oesman.

The explosive wing did the rest, and the Maties faithful celebrated the familiar sight of the No.11 crossing the line.

It wasn’t long before the crowd was off their seats again, and it was Herbst who was once again the catalyst for a bit of Maties magic. His chip from the base of a ruck was allowed to bounce, and right-wing Wilhelm Loock was first to arrive and collect. He fed big lock Hugo Kloppers, who showed a deft touch to move it to flank Jonathan Adendorf, who drew a defender and delivered the final pass to No.12 Charl Weideman to score.

Kemp, who had earlier knocked over the first conversion, missed the second and it was 12-3 after only nine minutes. Those were two good tries, but UCT could take heart from the fact that they did not stem from extended periods of domination from the Maties – that and the fact that they weren’t being outgunned by the powerful Stellenbosch pack.

UCT were adventurous, but a little too lateral and were being outshone by more direct and penetrative Maties runners.

The men in blue and white, though, did manage, to score next – this time through the massive boot of centre Marcel Brache, who slotted a penalty from the halfway line after 16 minutes. That scoreline of 12-6 would stay until the halftime whistle sounded, but UCT had fullback Therlow Pietersen – who was brilliant on the night – to thank.

Maties flank Sam Mabombo had cut a swathe through the Ikeys defensive line, but Pietersen read the play superbly and managed to intercept Mabombo’s pass to Adendorf and stop a certain try before half-time.

The second half started slowly, as defences outplayed attack for the first ten minutes.

But on 52 minutes the Maties exploded into action with a thrilling try. The forwards sucked in host of defenders in the UCT half, and the backline had space to launch an assault.

Outside centre Danie Poolman got some room to move and timed his grubber to perfection. He beat Adams – and more importantly, several UCT players – to dot down and open up a eleven-point gap.

With that score, UCT knew that they had to respond quickly and threw caution to the wind. The Ikeys are at their best when they adopt an approach of all-out attack, and for the first time in the match they started to look menacing with the ball in hand.

The Maties defensive line was defiant, but Mallett reduced the deficit to eight with a 59th minute penalty.

It was almost all-Ikeys for the final quarter, and strike-runners Brache and wing Marcello Sampson were beginning to cause havoc in the outside channels.

Superb interplay between backs and forwards got UCT to the brink of scoring several times, but the final pass seemed to always go awry and it wasn’t until five minutes from time that they would finally cross the whitewash.

Substitute Sam Peter made an electric impact when he came on the field, and it was the big flank who crossed over on the left hand touchline in the dying minutes.

That score ensured a thrilling finish, but try as they might, the Tigers didn’t have time for a final assault on the Maties line and the match ended 17-14.

In true cape derby tradition, it was a match that could have gone either way and UCT will be rightfully heartbroken at missing an opportunity to earn their first ever Varsity Cup triumph. JJ Gagiano who was again outstanding walked away with the “Final” Man of the Match award.

Take nothing away from Maties though, who showed their champion quality in absorbing the late UCT onslaught and controlling the game despite never reaching the levels that have made them so dominant in 2010.