You are here: Home1 / Ikey Tigers2 / Lanning’s Liquid Build Up to Intervarsity

It being my first Intervarsity, and with the rules around how players behaved in the build up to the game being a smidgen more fluid than they are today, I thought it a good idea to take up my selection into the UCT down-down first team. I mean, it’s not every day that one gets the call up to both! And to be brutally honest, we were much
more likely to taste victory with beer in hand – Sorry Solly! 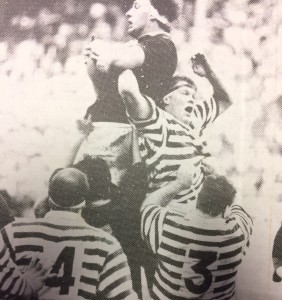 So after practice on the Wednesday, it was onto the busses that took the plethora of Ikey students out to that muddy mosh pit of a venue, Drie Geuwels, to pit our down-down skills against those in maroon. Extra salty pretzels and zero liquids would probably have been the ideal preparation, instead it was a good few chiboolies to go with the cheerleaders taking us through our Sing Song paces. A couple of warm up runs at the venue, and it was into our “Best of three” against the Maties 1 st team …

It does start get to get a little fuzzy from here on in, but with the help of various witnesses, it seems we went one up, got a little cocky, and found ourselves even with one 500ml to go. Dramatically, and probably fairly tragically for all involved, the two teams could not be separated in the third and final boat race.

With my back teeth already doing backstroke, the two captains were asked to hammer out a 1 litre head to head to decide the contest – Once and for all!

Struth Bob! Is there a greater cause, though? So for country and club, up we both went. 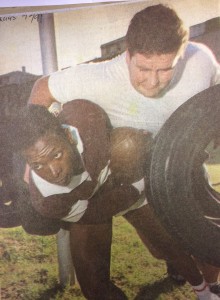 Well, knock me down with a bloody feather as the first one ends in a dead heat. Now not to blow smoke up my own arse, but more to paint a more realistic picture, these were not your normal “January, February, March” encounters, instead a more frisky 9 or 10 second affair.

These – I am told – were a little more calendar like. And only because I had the capacity to take in more liquid than the other fellow, I managed to edge that final litre down-down to take victory for the Blue and White.

That other fellow? Jaco Coetzee – My opposition loosehead prop come 16h00 at the Danie Craven that Saturday arvie! Jeez, did we have a laugh. Perhaps not in that first scrum, but certainly during the game.

The Ubumbo Corner
Scroll to top