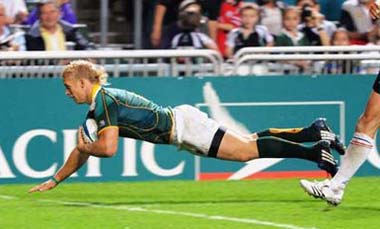 Ikeys star Kyle Brown has been named as the SA Sevens Player of the Year for 2010 – a season which saw him take over the captaincy of the national squad, a position which has previosuly been held by fellow Ikey Mpho Mbiyozo.

Brown, 23, picked up his award at the official SA Rugby Awards banquet in Sandton recently; an evening which also saw the SA Rugby Player of the Year crowned in front of a packed audience.

Kyle is now in his third year of playing for the SA Sevens team, having made his debut in the 2008/09 season following a stand out season with the Ikeys Tigers at the Varsity Cup. It has been a ground-breaking time for Paul Treu’s Sevcens team who clinched the IRB World Sevens Series title that year.

The UCT star was set to captain the South African team at the Commonwealth Games in October, but picked up a hamstring injury before his team’s departure for India, where the games took place. The interims captain was again an Ikey in experienced scrumhalf Paul Delport who went on to lead his side to win the bronze medal.

Kyle is back to full fitness and has since played for the SA Vipers at the Singapore 7s.