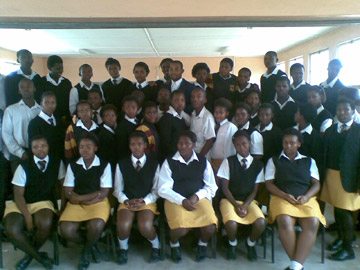 Qhayiya High School: the Boys u16 and u19 teams as well as the Girls u16 and u18 Teams. 5 of the girls are part of a High Performance squad to try develop them for National level.

UCT Sports Sciencists partnered with Qhayiya High School’s rugby sides for a research program and have invited the team to the Green Mile to be part of the Varsity Cup match against Tuks.

Qhayiya High School, Khayelitsha is a long way from UCT RFC and yet in a world dominated by soccer, this school’s teachers and learners manage to achieve the same levels of passion that could be found on any given Varsity Cup match on the fields of the Green Mile.

UCT Sports Science students were lucky enough to stumble across this diamond while conducting research on Rugby Coaches in Cape Town.

Despite the lack of grass or practice equipment, the lone field of Qhayiya was buzzing with a game of tackle rugby – being played by an equal ratio of boys and girls. And there was an obvious similarity to a Monday night on the Green Mile: the chant the sideline supporters were using went as follows: “A ‘U’, a ‘U’, a ‘UCT’!”

This Monday UCT RFC are giving the Qhayiya High School rugby team, the opportunity to come to the Green Mile to watch their heroes such as Ntsolo Setlaba and add their well-versed chants for the TUKS game.

Ikeys go down to log leading Tuks
Scroll to top